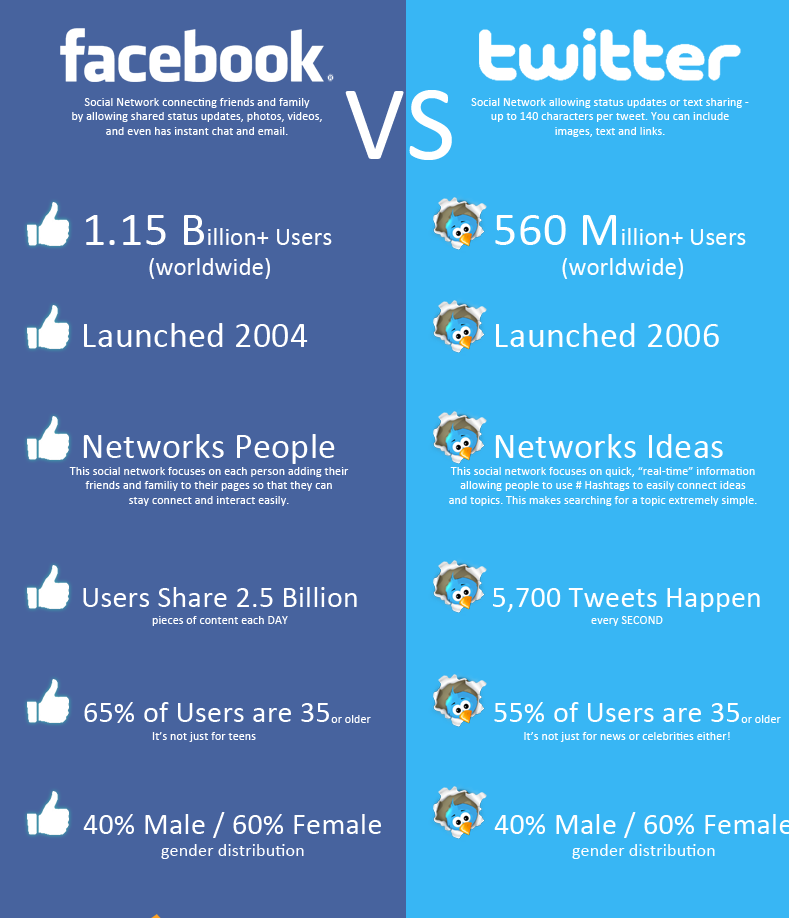 The most commonly used words of Today’s world, Facebook and Twitter, always stir the feelings, experiences and opinions amongst all of us. There are some people who love Facebook or Twitter more than anything else in their life. However, there are very few who are not interested to understand it or otherwise consider it a waste of time. Regardless of all the factors taken into account, the popularity of Facebook and Twitter is increasing day by day. One of the famous Basketball player Lebrron James created an account on Twitter just before the announcement of his Agency that was free. He got 150,000 followers in just 7 hours. On the other hand, the famous Lady Singer Lady Gaga became the first lady to achieve more than 10 million fans on Facebook (Conferences, 1995).

Comparison between the Two Social Networks

Facebook is providing various sources of information, promotion, communication, learning, teaching and many other free services to the various companies, universities, firms and various others. There are a few who use Twitter instead of Facebook for all these features. Most of the people have preferred use of Facebook instead of Twitter according to Public Surveys and various other forums (Conferences, 1995). There were times when people used to mix up the use of the term World Wide Web with Internet. Same is the case with Facebook and Twitter, where these two terms are always treated to be same where as practically both are different in most of the aspects.  The major role has been played by the mainstream media which always gave an impression that Facebook and Twitter are synonyms. Both of the Social Networking services are based on the baseline concept to make the communication easier, flexible, portable and easily accessible. However, Facebook has proved itself to be more versatile and flexible. The Facebook provides an easy way to upload pictures, animations, games videos, various apps and many other amazing features. Twitter in comparison provides very few features that consists of text, more text and much more text with a few other links. While comparing on the most commonly used social networks, it can be identified that, if twitter is a microblogging service, the Facebook has many other facets and features including the component of microblogging (John, 2011).

The distinction between the Facebook and Twitter is significantly complex where there is a huge difference between its versatility. The distinction is becoming even more difficult since most of them are improving its features and making it more versatile. Twitter has made it more advanced since it is now providing an ability to link an account to other services like LinkedIn. An application of Twitter, Twitpic, enables the used to share their pictures through the account of Twitter.

The reason behind comparison and contrast between Facebook and Twitter originates from the fact that both of the services are most recognizable and popular social networking platforms (John, 2011). The newly emerged Myspace and LinkedIn depicts its resemblance with Facebook whereas Tumbler has quite close link with Twitter. The major difference between the two social networks lies in the method of its communication. Facebook has been referred to be more passive in comparison to Twitter which is a more active form of social and network communication. Moreover, the Twitter is usually linked with a large party where people don’t know about each other but wishes to make more and more friends. Facebook on the other hand is considered to be a wedding reception which is filled with friends and families (Hughes, Rowe, Batey, & Lee, 2012).

Facebook and Twitter has are two separate platforms which are used simultaneously by many of the users. None of them is the alternate of other. However, it is the user’s choice, what he prefers the most for him in daily use.