Following Britain’s withdrawal from the European Union, we have seen high levels of long-term net migration in UK, and the sheer volume has given rise to public anxiety about pressure on public services, like schools, infrastructures, especially housing, as well as placing downward on wages for people on the lowest income.

Labor market is a key component of any economy and is intricately tied in with markets for goods, services and capital. At the macroeconomic level, demand and supply are influenced by local and global market forces, as well as factors such as immigration, the age of the population and levels of education (Staiger, 2016). The overall effects of Brexit on employment and the broader labor market in the UK will depend not just on migration flows, but also on the wider economic factors, such as trade patterns and business location decisions. Rumpel et al, (2013) disclosed that migrants from European Economic Community countries prefer cities or urban regions because of the employment opportunities. 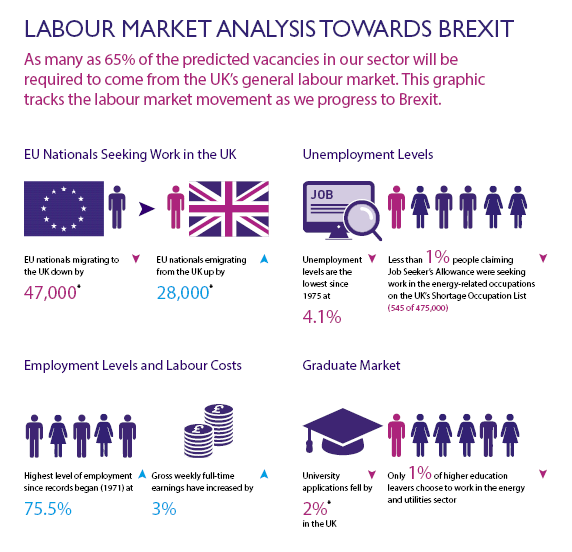 Post-Brexit Labour Market in the UK

This assessment is important because both public opinions and literature show positive and negative impact of Post-Brexit labor market in the UK economy. Considering any sort of economic integration, four freedoms specific to internal markets are affected. Free movement of goods, services, persons and capitals. In this context, this research work shows that EU membership had a positive effect on the UK immigrants, because of free movement of goods, services, person and capital (Ebell et al, 2016). The most important consequences of Brexit would affect the movement of capital that will negatively affect business by bringing more uncertainty (Robinson, 2015). Economic theory proves that, mobility of production factors ensures better resource allocation at international level brings an increase in welfare (Grosu et al, 2016).

Before the referendum, there was predictions or economic forecasts by the treasury that a vote for Brexit would result to an immediate economic recession in UK. The bank of England’s Central forecast was for UK economy to keep growing, but Mark Carney the bank’s governor said that the risk of a vote to leave could possibly include a technical recession (Aichele et al, 2015). Since the referendum, business investment growth has slowed down. Data show that business investment in the first quarter of 2018 was only 2.3% a little higher than at the time of referendum, compared to the Bank of England forecast before referendum for 13% growth (Balcerzak, 2016 ).

Those short-term forecast on the UK economy have attracted much consideration and criticism. Why? Because the economy did not go into recession as the gloomiest pre-referendum forecasts suggested; some people have cast doubt on all the pre-referendum forecasts that have been made by economists about the likely economic consequences of Brexit (Ortega &Peri, 2014). Although, the short-term economic forecasts on UK did not happen as predicted but the forecasts have laid a foundation to project what Brexit long-term imparts will be on the UK economy (Ottaviano et al, 2016). The long-term forecasts seek to address the question; “how much smaller or bigger will the UK economy be in 2030 following Brexit than it would have been, had the UK continued an EU member (Petroff, 2016)