First, it is worth noting that the term renaissance means born anew in French. This is especially fitting in that; the Renaissance was not only a move away from Gothic architecture but architects during this period were enthused by the proportioned and high asymmetrical buildings of Classical Rome and Greece. This resulted in the return to the ideas of ancient Rome and Greece in regards to architectural and art designs hence the perception of being born anew. That being said, renaissance architecture is mainly characterized by the European architecture that spanned between the early 15th century and the earlier 17th century (The Editors of Encyclopaedia Britannica, 2014). During this time, there was a conscious revival and development of specific aspects of classical through and material cultures such as classical orders and symmetry. Taking a look at the aesthetics of the architecture in this age, this paper will focus on how formalism and key thinkers during this period determined the structure based on the arrangement and function of visual elements during this architecture.

As earlier outlined, the renaissance architecture represented the rebirth of the classical period and also introduced a humanistic way of thinking informed by formalism. In line with this, this progression was influenced by writers, artists, architects and also politicians. Each of these played a key role in supporting the emergence of the Renaissance. Whereby, writers outlined how to apply classical elements to houses, basilicas, and bridges. Artists were mainly focused on renaissance art which is not a focus for this paper. Politicians created an enabling environment through funding and offering other forms of support to the architects and artists during this period. Finally, the architects served the purpose of coming up with the structures that exemplified the classical elements.

First, it is worth mentioning that Florence Italy is considered as the origin of the Early Italian Renaissance with the Medici family as the Godfathers of the Renaissance. In regard to the reverence granted to the Medici family, this is largely because of the role they played in terms of their patronage of the arts and architecture (Admin & Lambrecht, 2019). By virtue of sponsoring artists and architects and also offering them commissions for major achievements, they catalyzed the renaissance movement as the architects and artists were able to focus on their work without giving money a great preeminence (Admin & Lambrecht, 2019). Therefore, the Medici family played a very key role in the propulsion of the early Renaissance. For instance, the Basilica of San Lorenzo which was built by Brunelleschi illustrated in Figure 1 below is a key testament to the patronage offered by the Medici family as the family helped pay the architect to rebuild it. 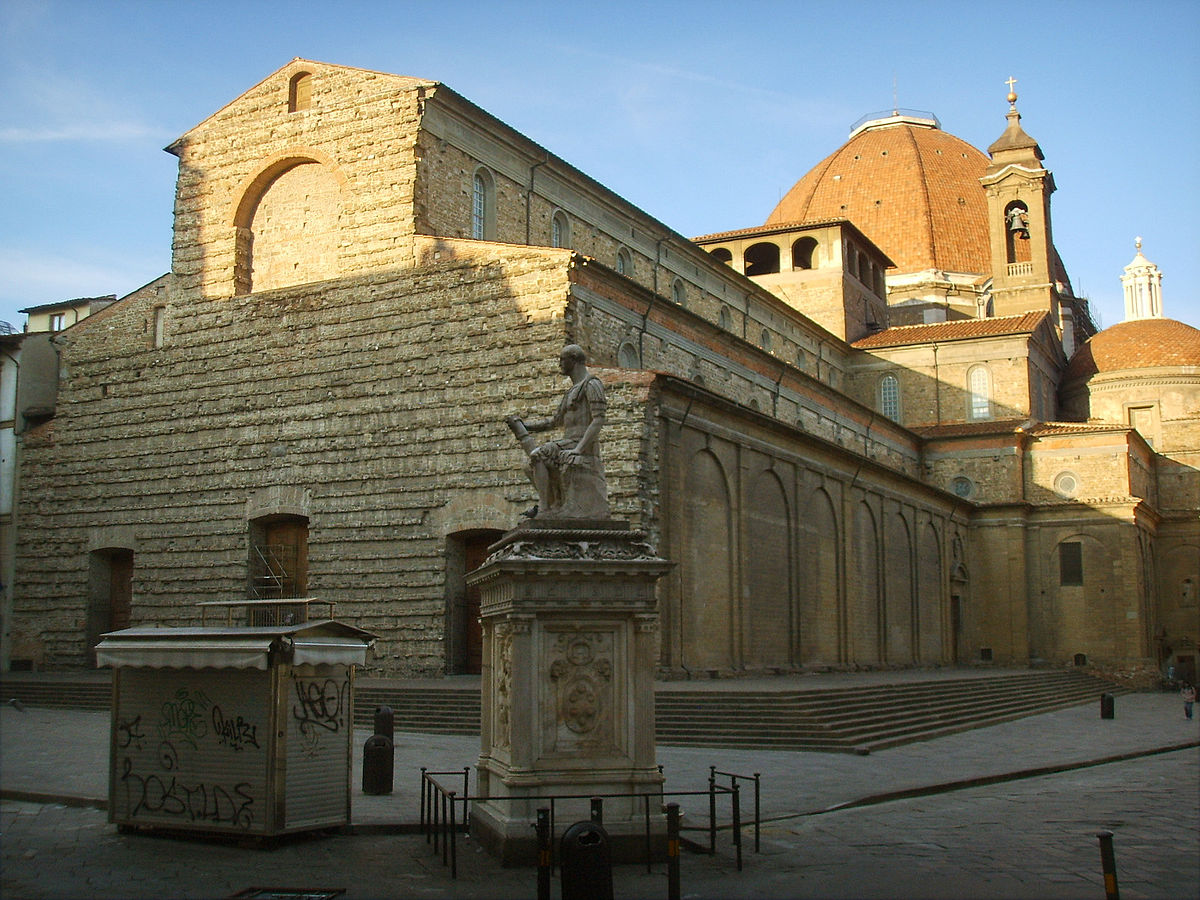 This history is important to understand the lineage Lorenzo de Medici came from. While this father and his grandfather, Lorenzo de Medici furthered their ambitions as well as the patronage (Bowers, 2012). That is, while his father and grandfather were renowned in their reigns, his patronage outdid their contributions to renaissance architecture to an extent that he is referred to as a true Renaissance man. This is a title that was a preserve of an individual who is well versed in subjects whereby due to his character, virtu and achievements, he exemplifies renaissance humanism (Bowers, 2012).

Lorenzo de Medici is revered is a key contributor to renaissance architecture because of his contribution both as a patron and a collector. By virtue of this, he is greatly associated with the pinnacle of the renaissance because most of the development in the renaissance era blossomed during his era. One key contribution includes the festivals he hosted in Florence which attracted artists and workers far and wide to come and showcase their talents and works (Bowers, 2012). Because of this virtue, achievements, and character, he furthered his family’s vision through patronage which inadvertently led to the proliferation of the early Italian renaissance in Florence which gradually spread to the rest of Europe (Bowers, 2012). By virtue of his patronage, Lorenzo de Medici is celebrated as one who largely influenced the renaissance period in its entirety and by extension, the European history.

Brunelleschi is credited as the originator of renaissance architecture renowned mainly for the Duomo shown in the figure below. Typically, this is the dome built to cover the spanning of the already existent cathedral. It is worth noting that the dome features the gothic pointed arch and ribs in the design (Renaissance Architecture, n.d.). However, it is structurally inspired by the great domes of Ancient Rome for example, the Pantheon, and it is usually considered as the first building of the Renaissance. 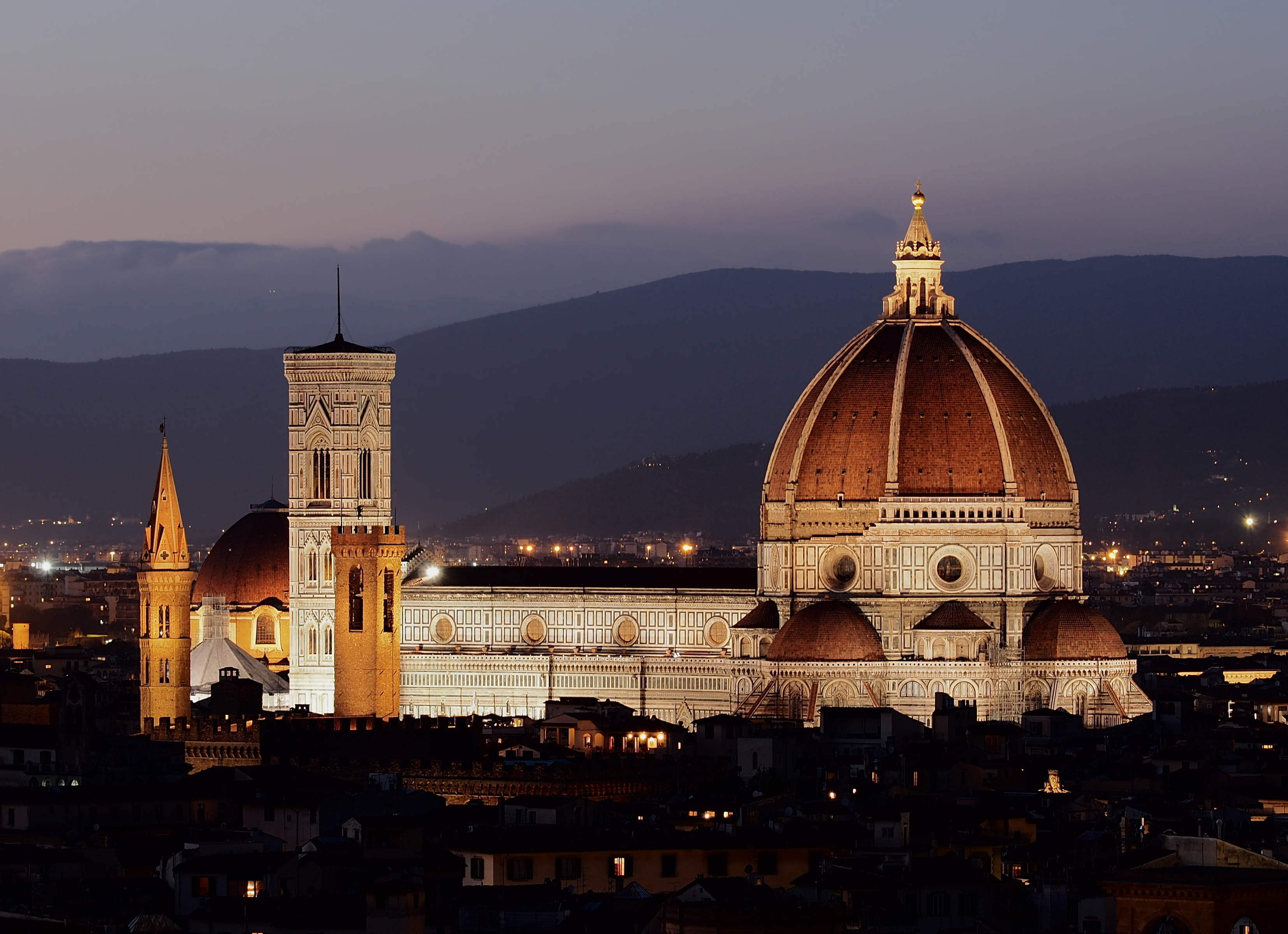 The dome still remains a hallmark even in the present day. This is because it is the largest masonry dome globally constructed without supports. This was made possible by Brunelleschi’s deep comprehension of the laws of mathematics and physics (Renaissance Architecture, n.d.). As it is going to be outlined later through the works of Donato Bramante, because of its unparalleled success, the dome became an essential aspect in church and later on secular architecture. Therefore, Brunelleschi became a key contributor to the early Italian renaissance which furthered the creation of Florence as a cultural center during this period (Renaissance Architecture, n.d.). Finally, it is worth noting that he is credited with the rediscovery of the principles of linear perspective which were later utilized by Tommaso Masaccio and then improved by Leon Battista Alberti. This way, it is evident that Brunelleschi greatly influenced the trajectory of renaissance architecture both in structure building and discourse pertaining to this form of architecture. 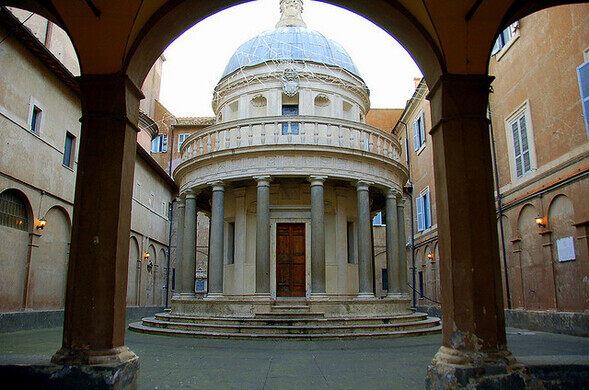 Additionally, to outline his prowess as a representative architect of the Italian Renaissance, Bramante is esteemed for the development of the applicability of classical elements to contemporary buildings, which characterized Italian architecture during the 16th century. That is, he showed a mastery of applying the revived design to buildings, mainly churches and city palazzos which was different from the buildings in ancient times. This way, studying and mastering ancient Roman architecture was key to the Italian Renaissance but its applicability was enhanced through the incorporation of decorative and ornamental aspects such as domes, statuary, and cupolas. To illustrate this aspect is the St. Peter’s Basilica, shown in figure 5 below, which was built using Bramante’s plan following the success of the dome which had been introduced by Brunelleschi in his Florence Cathedral’s design. Gradually, the dome became an indispensable aspect during the renaissance, especially for church designs.

When Donato Bramante moved to Rome, high renaissance emerged which was later replaced by the late renaissance. However, unlike the high renaissance, the late Renaissance was typified by complexity, sophistication, and innovation as opposed to the repose, clarity and harmony of the high renaissance (Craven, 2017). Additionally, this period was characterized by extensive architectural theorizing where Andrea Palladio is a renown renaissance architecture theorist who published influential books. One of his most influential contributions is “The Four Books of Architecture” (Craven, 2017). Here, Palladio describes the five classical orders and also outlines the floor plans and elevation drawings how to implement the classical elements to houses, basilicas, and bridges. Also, in another publication, he examines the local architecture such as the Pantheon in Rome to deconstruct and illustrate Classical design (Craven, 2017). His contribution in regards to the use of columns, pediments, and domes serve as key embodiments of classical architecture. One of his well-renowned contributions to the renaissance architecture is in his development of the Palladian window, as shown in figure 6 below, which he arrived at following the transformation of the Gothic remains of a building. 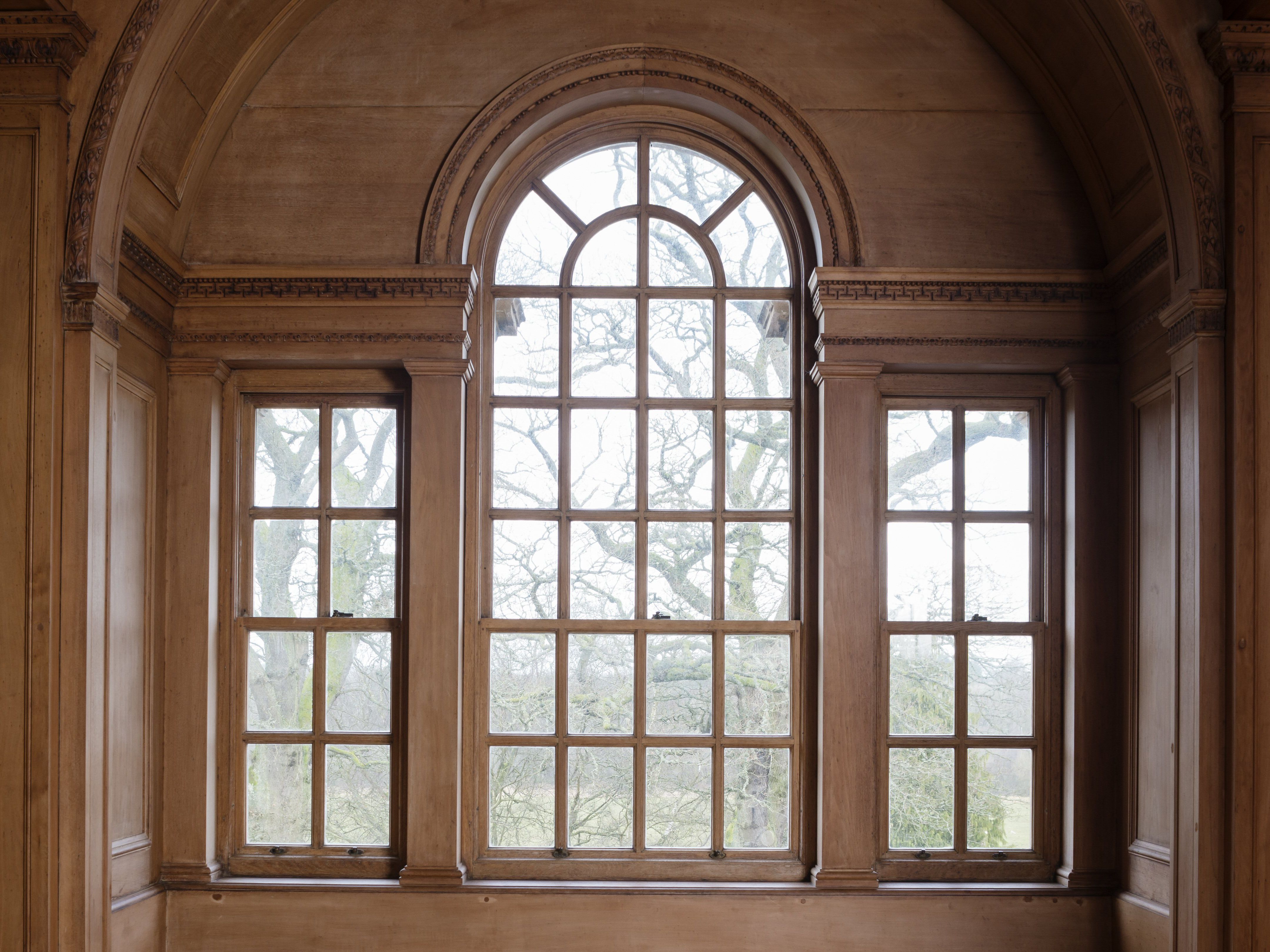 Renaissance architecture is characterized by several key features are described above, these include, niches with sculptures, square lintels, domes, arches, pediments, pilasters, symmetric arrangements of doors and windows and domes (Craven, 2017). The centrality of the renaissance architecture is pegged upon the revival of ancient Roman and Greek forms. These include the round and column arch and the predominant dome. In line with this, renaissance architecture is built around ensuring harmony between buildings and body proportions (The Editors of Encyclopaedia Britannica, 2014). Therefore, the focus is on space and mass whereby architects are significantly drawn to building carefully proportioned and highly symmetrical buildings which were enhanced by the incorporation of the ornamentation in the Gothic era (Craven, 2017). Additionally, as renaissance architecture spread to the rest of Europe, each country added key elements of their tradition to fit their aesthetic appeals.

Central to the renaissance architecture is the evaluation of an architect design specifically by virtue of its aesthetic formal properties inherent in its form and style. This is especially criticized in regards to the ability to form a purely aesthetic judgment (Mitrovic, 2003). In this regard, it is argued that is difficult to come up with an aesthetic evaluation without being influenced by formal and visual properties. This is because central to contemplating a building visually in terms of its three-dimensional properties, the theoretical and interpretative aspects are important as a building consist of form and matter (Mitrovic, 2003). This raises aspersions on the ability to consider the form independently from its narrative aspects.

Renaissance architecture is a key cultural and architectural formative period in history marked by the re-establishment of classical elements influenced by Greek and Roman influences. In line with this, it is marked by a move away from the representational aspects of a building to the arrangement and function of visual elements. This was largely influenced by formalism which is focused on the aesthetic properties of an architectural design. This was then furthered by the influence of thinkers who served to propel renaissance architecture further by either theorizing, offering patronage or building the structures. This way, it is shown that this was a key formative period especially for church architecture as experienced in the present-day world. This way, Renaissance architecture can be termed as a link between the gothic and baroque period and by extension the beginning of the influence of formalism which has been carried to contemporary architecture.

Our well experienced architecture writing help team which consists of certified architects provides a wide range of services including but not limited to:

Contact Now
Peachy Essay, registered as PEACHY ESSAY LLC (company number 000950125) 30 N Gould St Ste N, Sheridan, Wyoming, 82801, US: a professional writing service that provides original papers. Our products include academic papers of varying complexity and other personalized services, along with research materials for assistance purposes only. All the materials from our website should be used with proper references. The terms are represented by the law of the US.