Critically evaluate the methods used for assessing cognition in neurodegenerative disorders
Abstract
Neurodegenerative disorders cause cognitive impairment in the patients that can be accessed by various tests available in the clinical setups. These tests mainly analyse the executive functioning and visual-spatial memory of the patients to evaluate their mental health. In order to detect primary as well as secondary cognitive disorders, these tests are aimed to be simple, fast, cost-efficient and substantially validated. In order to achieve these standards, improved versions of previously developed tests, like minimal mental state examination, have been developed. Recently, computerized batteries with increased sensitivity have also been introduced to save time and reduce any chances of human error. However, further research needs to be performed to improve and validate these tests.
Introduction
Assessment of cognition is a useful tool for analysing neurodegenerative diseases. It helps to screen cognitive problems in patients suffering from neurodegenerative diseases and evaluate the extent of severity of a disease. The cognitive impairment tests help to diagnose not only the late stages of disease like dementia but also help to detect the lack of cognitive abilities at primary stages like mild cognitive impairment (MCI). An efficient assessment of cognition may also disclose the cause of a neurodegenerative impairment thereby facilitating the correct diagnosis of a disease. Cognition also helps to predict mortality during hospital admissions (Ekstrom et al. 2017). The practical applications of cognition assessment necessitate the development of better skills and methodologies that could benefit the clinicians and neurologists for improving patient’s condition (Woodford and George, 2007). The current review covers the research performed on the most commonly used cognition tests in the last five years. It critically evaluates various methods used for assessing cognition in neurodegenerative diseases analysing their efficacy in the clinical setups. It will highlight the drawbacks in the existing methods and how they have been overcome in the recently developed methods. In addition, suggestions for improving various methods will also be presented.
Minimal Mental State Examination (MMSE)
One of the most recommended and most commonly used methods for cognition assessment involves minimal mental state examination (MMSE). It is a 10 minute test containing 11
questions (Table 1), developed by Folstein, Folstein and McHugh (1975) for quantitative estimation of cognitive impairment. 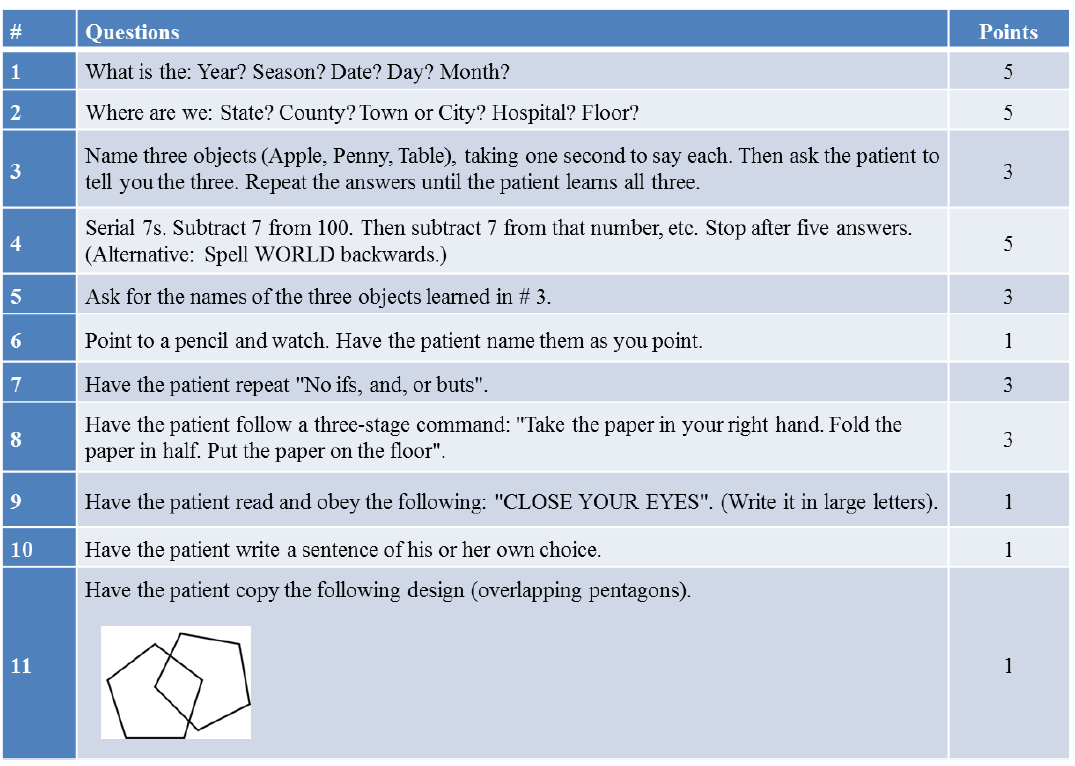 MMSE test is time taking test with less sensitivity. Recently, various studies have found MMSE to be less efficient for the evaluation of various cognitive impairments especially mild cognitive impairments. For instance, Pasi et al. (2014) found MMSE to be less relevant for the analysis of cognitive impairment caused by white matter microstructural damage in small vessel disease. Short forms of MMSE, that combined some specific items for testing dementia, have also been tested. Some of the studies reported these short forms of MMSE to be useful for analysing cognitive impairments. However, Stein et al. (2015) argued that those studies examined limited number of samples. Stein et al. (2015) performed a detailed analysis on a large number of patients (3,327) and found that short MMSE did not outperform the original MMSE. They found that the short forms were rather inappropriate for screening dementia. Therefore, it is suggested that the short forms of MMSE should be further explored, tested on large number of patients and efficiently validated before being used in the clinical setups. However, this study included patients only above age 75. It is recommended
to use include patients from different age groups. In addition, this study included only those patients whose first language was German. Therefore, the results may have cultural background bias.
Severe Minimal Mental State Examination (SMMSE)
Severe Minimal Mental State Examination (SMMSE) is a modification of basic MMSE test for the evaluation of severe cognitive impairment as in the cause of Alzheimer’s disease. This test includes simple questions related to complete name, spellings, verbal fluency and visual-spatial abilities. In addition, it tests receptive and expressive language skills among severely impaired patients. Wajman et al. (2014) found that age and gender had no impact on the results of this test. However, the results of SMMSE were influenced by schooling of the patients. They found that schooling did not have any impact on MMSE scores while it influenced the scores of SMMSE test. Therefore, in order to make this test fit for all the patients, it is recommended to remove the educational bias from the questions included in this test. In addition, similar analysis should be performed on other tests used for the evaluation of severe cognitive impairments including test for severe impairment (TSI), severe impairment battery (SIB), severe cognitive impairment profile (SCIP) and Modified Ordinal Scales of Psychological Development (MOSPD).
Abbreviated Mental Test (AMT)
Another method for cognition assessment includes abbreviated mental test (AMT) that involves just 10 questions for cognitive evaluation in only 3 minutes. Recently, a four question version of AMT, named as AMT4, was also introduced that was expected to be used for routine cognitive assessments. However, Dyer et al. (2016) tested AMT4 in an Emergency Department and found that this test had substantially low sensitivity. They therefore, rendered this test unfit for use as a general cognitive screener in the emergency departments. In addition, the test was found to have different cut off values for educated versus uneducated thereby showing educational bias (Chan et al. 2013). Extremely short tests are expected to be less sensitive. Thus, while achieving time effectiveness, the sensitivity of the test should not be compromised. In addition, the choice of question should be made carefully to exclude any educational bias. For instance, question asking counting 20-1 backwards may be replaced with some general question that is easy to answer for uneducated individuals.
Six-Item Cognitive Impairment Test (6-CIT)
It is a simple and brief test that involves one memory, two calculations and three orientation questions, making total of six questions. Hessler et al. (2016) investigated the psychometric quality of 6-CIT for the detection of dementia in general hospital patients. They found that this test outperformed the nurse ratings for dementia diagnosis among the older patients. In contrast, evaluation of primary care patients by Connon and Larner (2017), using 6-CIT, revealed high sensitivity but low specificity for the diagnosis of dementia. Therefore, this needs to be further validated before its utility in the primary care setups. The calculations involved in this test are also expected to create educational bias in the results. Hence, there is a need for modifications in the test followed by validation studies on substantial number of patients.
Ascertain Dementia 8 Questionnaire
Ascertain Dementia 8 is a questionnaire containing eight questions to evaluate the patients with Alzheimer’s disease. This questionnaire tests judgement, orientation, memory and function of the patients via informant-rated or self-rated test. Chio et al. (2017) compared the self-rated AD8 with informant-reported AD8 in patients of average age 77. Although it was previously known that this test can be rated by the patient himself, Chio et al. (2017) reported that the results of informant-rated AD8 were more accurate as compared to those of self-rated AD8 test. This study shows that although AD8 is quick and simple, it produces better results with trained human staff.
Clock Drawing Test (CDT)
As the name indicates, Clock Drawing Test (CDT) asks the patients to draw a clock. It is mainly a visual-spatial test that requires the patients to draw a clock, place the numbers and draw the hands to indicate a time (usually 10 past 11). This test has the advantages of brevity, simplicity and lack of any educational, cultural or language bias. However, many studies argued that this could not differentiate between subtypes of dementia. Recently, Ricci et al. (2016) introduced a new three-cluster scoring system for CDT. Their results indicated that CDT successfully differentiated the healthy MCI and mild Alzheimer’s disease patients.
Intersecting pentagons is also a useful visuospatial test that requires the patients to copy the design of intersecting pentagons. Recently, a brief LSD-4 test has been introduced that requires correct reproduction of four letters or shapes as shown in Figure 1. The results of this test on patients revealed good ability to detect the cognitive impairment (Williams et al. 2017). However, further research needs to be done on its validation for practical applications.
In addition, random comparisons with the already available CDT test should also be made using large sample sizes. 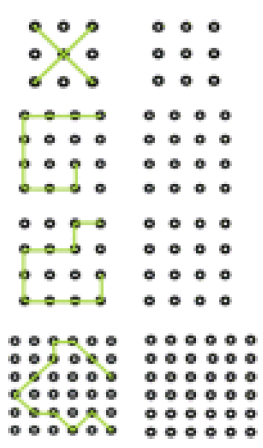