The use of Marijuana, both for medical and recreational purposes, has witnessed one of the most heated debates in the world. Whereas some countries such as Canada have legalized the use of recreational marijuana, a vast majority of the governments in the world consider the drug as not only illegal but detrimental to the health of the user. Casual use of marijuana and its derivatives is almost as dangerous as the sustained use of the drug. Abstinence from occasional use of marijuana is an integral component towards achieving high-quality health.

The National Institute of Drug Abuse (2018) indicates that chemicals that are released by Marijuana such as Tetrahydrocannabinol (TCH) may alter one’s sense of perception, lead to an increased appetite and distortion of time. An altered spatial judgment could especially prove catastrophic in situations in professions such as truck driving where a sustained concentration is pivotal for the proper execution of the professional core tasks.

If marijuana is consumed through food and drink, the manifested characteristics may take a relatively long period before they become evident. This puts marijuana consumers at the risk of consuming more TCH, hence increasing the detrimental effects of the drug such as altered perception and other human physiological characteristics that play a role in daily life processes. NIDA further indicates that vast amounts of marijuana in the human body could potentially result in psychosis, a condition that ultimately gives way to hallucinations and other mental disorders that could prove risky among people engaged in highly sensitive professions such as medical professions. Although the effects of THC are known to last in the body for a limited amount of time – usually less than three hours, the use of marijuana may predispose one into a habitual or addictive usage pattern that could become hard to break hence making the subject entirely dependent on the ‘fix.’

The US National Institute of Health indicates that one of the most dangerous effects of marijuana is developing an addiction to the substance. No matter the magnitude of other outcomes that could be associated with a given drug, addition is probably the worst effects since it builds up some form of dependency that is hard to shake (National Institute of Health, 2019). The NIH further indicates that marijuana is the most illicit drug being abused in the US, where individuals as young as twelve years old are reported to have used the drug at least once a week.

Long term effects of continued use of marijuana, according to the NIH, may include an adverse alteration to the development of the brain. This is dangerous, especially among young people who should be going to school, since it could result in the subject dropping out school hence negatively affecting their future lives. Further, NIH indicates that cases of cognitive impairment and lowered IQ could be associated with individuals who had been using marijuana while growing up, or as adolescents. This makes the drug a danger to national interest since the efficacy of the future workforce could be threatened if the drug is either legalized or included as part of the conventional medical prescription medicines that could end up in the ‘wrong hands.’

Also, the National Institute of Health indicates that a sustained use of marijuana could result in bronchitis. This condition affects the chest, could result in frequent chest pains and reduces the overall efficiency of the affected person. Diseases associated with bronchitis are similar to those caused by smoking tobacco. In unchecked, some conditions could even lead to lung cancer. This is true regardless of the frequency of consumption, thereby making casual marijuana users as exposed as those that use the drug daily. Limited research evidence shows that exposure to marijuana’s THC component could adversely affect the development of a young and experience-guided brain; as is the case among many young people before the age of twenty-one. NIH indicates the drug is especially harmful to cytoskeletal dynamics, which in turn hinder the proper development of neurons that affect the cognitive and intellectual aptitude of the affected individuals. To this effect, adults who had smoked marijuana, whether on a highly active or casual basis, have relatively fewer connective tissues in their brains hence leading in a marked decrease of alertness and a reduction in the general learning process. 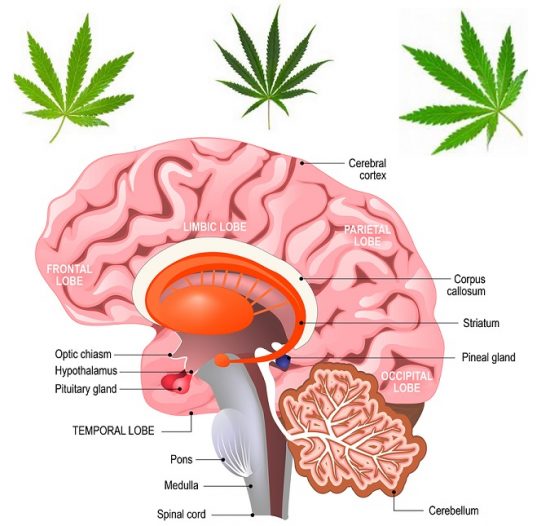 Casual use of marijuana could result in irreversible mental illness (nih.gov, 2019). Cases of depression and anxiety are exceptionally well pronounced among individuals who have abused the drug at some point in their lives. NIH also indicates that the drug may advance the length of time it takes to witness the first psychotic disorder episode. Other alteration on the trajectory of the various disease may ultimately make it much difficult to address other condition that would typically not have manifested themselves without the abuse of the drug.

Both casual and sustained use of marijuana results in a noticeable decline in neurocognitive abilities (Bolla et al., 2019). Daily processes such as leaning are profoundly impacted when a user gets exposed to the chemicals in THC, regardless of the levels of activity. This assertion is especially crucial since it would mean that individuals who ingest marijuana inactively are just as exposed prone to risk as those that use the drug on a near-regular basis. However, there are individual differences regarding the dosage of the drug that is introduced into the body. To this effect, heavy users are likely to become less active, less intelligent and more dependable on the drug than people who use marijuana mildly. Nevertheless, casual use of the drug could easily morph out into full blown and heavy dependence on weed, hence the need to create an critical informative paradigm while addressing issues related to marijuana.

According to Bolla (2019), evidence regarding the use of marijuana is usually non-linear. This makes it relatively difficult for policymakers to make an accurate estimation of the challenges associated with the use of the drug. However, common elements of evidence into drug have included evaluation of both visual and verbal memory, as well as psychomotor speed. This assertion, although inconclusive, indicates that one is better off abstaining from the use of the drug, even if done minimally during casual events. Nevertheless, several research publications have indicated specific sustained characteristics among marijuana users; including addictive behaviors, are formulated in the human body following heavy use of the drug. The term ‘casual’ is relative and highly subjective. Based on the research evidence presented by Bolla and team, it should be intelligible to argue that society punishes cases of marijuana users impartially, and countries in the Middle South well need to accomplish some financial freedom putting these regions into careful applicants.

A research publication completed by the University of Maine indicates that the use of marijuana, both on active and casual levels, was associated with certain medical conditions bad memory and misplaced social behaviors among abusers (Maine.gov, 2019). Such impairment has a negative influence on a given individual’s learning trajectory, levels of sustained alertness and a possible increase in the amount of sensory receptor failure which would ultimately prove catastrophic if left at the hands of a specific group of people. This makes all activity and action meant to combat such vice dependent on the goodwill of society to become successful. According to this publication, any use of marijuana – regardless of the volumes of the substance of consumed, would significantly affect the subject’s ability to make decisions hence making it necessary of positive critical interventions as a means of addressing the problem.

Therefore, the material developed by various scholars indicates that the use of marijuana, however casual, has detrimental effects on the user. Such effects could include loss of memory, reduced attention and the destruction of brain connective material. Consequently, marijuana users could experience several adverse effects that, usually, could not have had to be associated with the condition.

National Institute of Health. (2019). Adverse Health Effects of Marijuana Use.

National Institute on Drug Abuse. (2018). What are marijuana effects?

University of Maine. (2019). Marijuana’s effect on the body and brain.