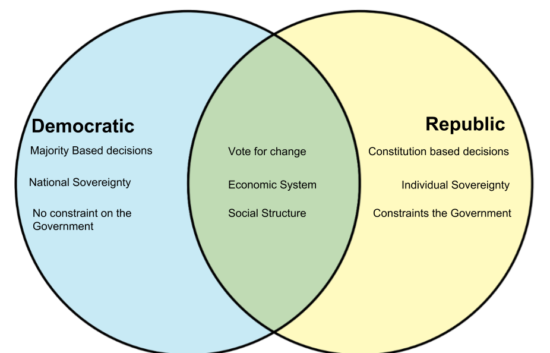 Arguments on Republic Vs Democracy

The fate of a state is based on the hands of its rulers, who currently are referred to as the government. There are various ways of forming a government with each having its merits and demerits. Initially, individuals were ruled using anarchy or monarchy systems, which was a rule of a single-family or individual. However, later on, people realized that the system was not best for them and hence, there was the emergence of the Republic and Democracy system. More often, the term republic and democracy are used interchangeably. People have not yet realized that the two systems are quite different. The main difference is based on the limits placed on the government by the law. The republic system operates through the rule of the law while the democratic systems function through the rule of the majority.

On a similar note, in a republic system, the state is ruled by a representative of the citizen body while in the democratic system, the supreme power is bestowed on the people or their elected agents through a free and fair electoral process. In most cases, the democratic system does not put into consideration the interests of the minorities. Both systems use a representation system. Whereas the proponents may argue that a republic system functions better than a democratic one, the opponents on the other hand state the vice.

In a democratic system, all the citizens take an active role in making the laws, which govern the nation they reside in. All the citizens have equal voting rights and hence an equal representation in the government. In essence, the law governing the nation lies in the hands of the citizens. Although the republic may look somehow similar to the democratic system, there is a difference between the two. In a republic system, the citizens of a state vote to elect agents who thereafter represent them in government proceeding to pass on laws. A democratic system does not have a constitution and hence, the laws are made by the elected representatives. The constitution, however, has the final say in a republic system. The laws governing the residents of a nation are normally constantly verified to ensure that both the majority and the minority are protected.

There are numerous reasons why great philosophers such as Socrates, who was considered as the father of philosophy, did not like the democratic system. Socrates named the democratic system a mob rule. On different occasions, he tried to explain to those around him such as Adeimantus why he disliked the system. He strongly pointed out that voting was a skill, which needed to be learned and not a random intuition. There was a need to train people systematically on how to vote. Socrates believed that only those who were well versed with the process should be allowed to cast their votes. He likened the process of allowing an uneducated person to vote as handing over the command of a ship to an individual who did not know anything about sailing. The opponents believe that the republic system has numerous flaws. After the completion of the voting process in a republic system, there are many people involved in the decision-making process, which makes the process not only slow but also ineffective. In addition, the process requires amendments to be checked several times, which may require a lot of time and resources. The process can be challenging more so when the issue at hand requires swift decisions to be made.

The Merits and Demerits of the Republic system

The structure of a republic system requires the representative to vote rather than requiring all the citizens to cast their votes once an issue arises. The system simplifies the democratic process by ensuring that every region is well-represented. In addition, the system provides citizens with the ability to make views on the various operations of the government. The representative system takes away the ability of the citizens to make direct decisions on matters pertaining to national policy. However, it does not eradicate the influence of the people on the government. If the citizens are dissatisfied with the performance of their elected leader, they can vote out the individual during the next election. On the other hand, the elected individuals in a republic system may decide not to represent the issues raised by the majority of the citizens and instead choose to make a decision based on their personal preferences. On a similar note, a republic form of government encourages deception. This is due to the fact that the elected individuals may pursue their agendas since there is so little to stop them from doing what they want. The merits and demerits of the republic system indicate that with balance, the system can be an effective form of the government.

The Merits and Demerits of Democratic System

Most of the countries, more so in the West, are ruled using a democratic system due to its efficiency. The residents of those countries receive the benefits of living in a democratic nation by having to choose one representative who makes decisions concerning the people who voted him or her in the government. The system, therefore, saves the resources as well as time for the government and hence, paying more attention to other important issues. The system also encourages people to vote in an election. Voting makes people think and feel that their opinions, as well as voices, are heard by the government and hence, they are more likely to participate in the elections. However, on the other hand, the democratic system has diverse flaws.

People tend to reside in neighborhoods where they feel secured and comfortable. Rather than focusing on diversity, most people think of ways in which they can maintain their status quo hence the occurrence of political polarization. Moving to the regions where they can be the majority may lead to a division of unity among the community members. Finally, in a democratic system, the voice of the people normally ends after the elections. Once the representatives are selected people have no control over the kind of decisions that will be made.

Arguably, the republic system is more stable than democratic while at the same time difficult to transform it into a monarchy or dictatorship. In addition, a smaller unit in most cases is efficiently managed, reacts and acts more expediently, and more associated with national defense and personal liberties. The democratic system, on the other hand, is more equated with reducing personal liberties under the pretense of public safety. Practically, the republic system is between the extremes of anarchy and dictatorship. In this type of system, both the minority as well as the majority benefit unlike in a democratic system, which could lead to communism or socialism.

According to the constitution, any person can own private property and has equal chances of growing and prospering as well as develop their businesses. Unlike the democratic system, the republic controls the powers of both the government and the citizens. Providing uncontrolled powers to both the government and the citizens may result in disastrous effects. However, balancing the powers from both sides may result in significant positive effects.

A Final Word between Democratic and Republic System

Although most people use the term democratic and republic system interchangeably, there is a significant difference between the two systems. Most countries in the world are ruled using a republic system. The republic system, however, also differs widely since whereas some of the systems operate through a parliamentary system where the legislature, who is elected by the people, decides the executive branch, others operate using a presidential system where the president, who is the head of the government, is elected. While both systems have their strengths, each one of them leads to great although different problems. As stated above, although the democratic system uses numerous resources, it is less efficient as compared to the republic system. Anything could happen in a democratic system. A good example occurred when Hitler was elected as the president of Germany.

He stated that he was going to get rid of numerous Jews. Apparently, through the democratic style, Hitler not only managed to create a dictatorship system but also take away the freedom of speech, and other different human rights. The republic system on the other hand also has diverse flaws. Once an individual is elected into the office, they have all the rights and powers to do as per their wish. They may make any decision on behalf of the citizens regardless of whether it is good or bad. However, considering the merits and demerits of the republic and democratic system, the majority of the citizens would prefer to be served by a republic system since it caters to the needs of both the majority and the minority.