Islamic Philosophy: Its Origins and Development

Philosophy is actually related to the progress and changes taking place with the passage of time. New concepts and new ideas brought many changes in ethics, moral and spiritual behaviours and scientific issues. The history of Islamic philosophy is very old and this history is not based on Islamic countries only, but also based on West (Southern, R.W., 1962; Behishti, Bahonar and Rizwani, 1990; Sharma, 2002; DenBoer, 2013; El-Bizri, 2013). Almost one thousand years ago, the Islamic history started in the west and mainly divided into three phases:

(1), primitive or uncivilized phase being involved in translation, analysis and awareness of Arabic study;

(2), acceleration of translation and study as a results of efforts held in first phase and

(3), a phase of Islamic philosophy which started in nineteen century and is available till date.

Origin of Islamic History and its Development

Islamic concept started up six hundred years ago before the era of Christianity. That time the main origin of this philosophy rose from the four different zones including India, China, Russia and Greece. Among these zones, India and Greek became the powerful zones, while the China and Russia suffered shrinkage in the Islamic philosophical aspects. After few years, this shrinkage was disappeared and these zones became powerful as compared with several other areas. The initiatives taken in Greece expanded to other zones including Rome, Syria and Alexandria and within less or more fifteen years of struggle, the Islamic philosophy became stronger and with the passage of time the influence was so higher that two categories were named only.

One being the Muslims and others the non-Muslims. In the seventh century, new thoughts came into reality in the Arabian deserts which resulted in the new life. This thought was Islam which was different from all the thoughts with superiority and influenced the human soul in such a way that was never seen before. Persia and Byzantium both were the strong empires and efforted to grow their tides but the death of the first founder resulted in their separation from the bay of Biscay. Similarly, these thoughts were widespread and glory of Islam was recognized by everyone in the world. The knowledge of Islam came directly from Allah (Quran) and through the great messenger, the prophet Muhammad (PBUH). In the very first verses of Quran, “it commands the prophet Muhammad (PBUH) to read in the name of Allah who is the most Beneficent and the most Bountiful, who taught men the use of pen and gave him the knowledge of things (96:1-5).

According to the Deutsch, the Quran is the book due to which the Arabs became the King of Europe. The Quran is the book, who brought the knowledge of philosophy, wisdom, humanity, equality, birth and death, and birth after death, medicines, astronomy, bridging between mystery and science when the darkness prevailed everywhere. With the teachings of Quran and Prophet Muhammad (PBUH), there was no wonder that the intellectual activities of the Muslims arose and they were in the fountains of knowledge which boosted their progress across the world. The significant starting of these fountains were Quran and Hadith. The Quran gave the Muslims a new ethical approach, new philosophy of life and new political direction.

There was a great rise in the Muslim thoughts due to the Abbasid Caliph. Al-Mansur was the first Caliph who laid the foundation of Baghdad in 762 C.E, and offered the scholars to translate the scientific and literature from different languages for the sake of knowledge (Strange, 2017). The royal encouragement put positive effects on the scholars and they involved them in this task with interest. Most of these scholars were Jewish and Christians and new entrants to Islam. Abdullah Bin Al-Muqaffa was one of the converters to Islam who translated the Sanskrit ethics (al-Muqaffa and Jallad, 2002).

Similarly, an Indian scholar translated the astronomical (Sidhanta) and mathematics works. Afterward, the Caliph Al-Mamun formed an academy in 832 C.E, under his observation whose purpose was gathering of translations in Baghdad (Shanks and Al-Kalai, 1984; Joseph, G.G., 1987; Majeed, 2005). This academy became one of the best institutions where the translations from Syriac and Pahlawi works were done. In the time of Caliph Al-Rashid, the pupil of Bakhtishu was appointed as the academy in-charge who translated medical manuscripts. Further significant works were done by his pupil. 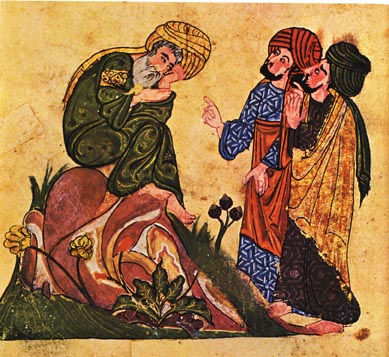 Islamic Philosophy: Its Origins and Development

The Islamic philosophy spread like a boom and there were a lot of developments. Education was improved and every village had a mosque and besides that some school for teaching Quran, the life and examples set by the prophet Muhammad (PBUH). One of the examples of improved education was the colleges build in Baghdad. It was thought that time that many aspects of these colleges were copied by the Europeans. Al-Ghazzali remained his head for the four years (Al-Ghazzali, 1963). Several changes were conducted time to time and education systems were improved which highlighted the Islamic Philosophy all over the world. Beside these institutes, the Islamic Philosophy was taught in the mosques, shrines and homes etc and travelers, students and teachers were facilitated by the wealthy people.

The rich people participated in these works and provided all the necessary things for the sake of Islam and knowledge to Muslims and those who were interested to learn about Islam. According to Nasir Khusraw, the mosque at the Cairo in the 11th century was usually visited by the five thousand men on a daily basis for the sake of hearing lectures from Islamic scholars (Hunsberger, 2000). The book writing and selling started up in the Abbasid time, and papermaking was at its boom. In Mosul, the scholars were provided with the free papers and stipends. Muslims received the old traditions from the Persia, Syria and Alexandria but in reverse provided Europe a new horizon of philosophy, thinking, ethics, knowledge and scientific views. That time Muslims became their leaders and taught them what they were not able to know.

One of the best philosophic approaches was gathering of Hadith, the formulations of principles and verification of statements. In this regards, the Bukhari contributed in a realistic manner and collected 600,000 statements about the life of prophet from different sources (religious scholars) and after a critical analysis found that 7275 of these statements were correct. Muslims participated in every field of the life and became the great historian of that time. They performed long journeys to get the materials. Islam produced thousands of philosophers which have done excellent work in their lives. Some of the historical Islamic philosophers are mentioned below.

Islamic Historical Philosophers and their Thought

Al-Kindi was one of the greatest philosophers who believed in the existence of one God. His thoughts rendered the Islamic philosophy with Aristotle’s first cause. He did not provide the extended views as his thinking was that the knowledge given by the prophet is superior to philosophers. Al-Razi was also a great philosopher and asserted that “creation of the world was at a finite moment in time, and not out of nothing”. His arguments were that the philosophy can only be the reason for salvation. The 10th and 11th centuries were the time of Al-Farabi and Ibn-Sina (Fackenheim, 1946; Eichner, H., 2010). The formal wrote many documentaries on the Greek work.

According to him, the God created the world as an eternal emanation. He argued that there are numerous proofs for the existence of the God and his highest in ranking. He described two cognitions, one being knowing the God and other self knowing act. Ibn-i-Sina was one of the leading philosopher and Islamic physician, astronomer as well as scientist. His written works including “canon of medicine” and “Healing” was very famous among the Europeans (Marmura, 2005). About God he described his philosophy that there are several pieces of evidence, self thoughts and concepts which can relate the possibility and impossibility. Based on these facts God’s existence can be demonstrated. A triadic system was developed by him for his statement saying that God exists as first intelligence, self knowledge which emphasizes on the first intelligence. These intelligence further follows three cognitions, first being knowledge of God, self knowledge as a being and then self knowledge as a possible being.

After these philosophers Islam produced many others among which the Ibn Rushd was a great philosopher who answered the Al-Ghazali’s statement against two Muslim philosophers such as Al-Farabi and Ibn-i-Sina (Griffel, 2009). His contributions brought the concept of philosophy back to the track. Ghazali wanted to reconcile the standards of Islam by using mystical approaches. He declined the relation of philosophy and religion by describing the inconsistency with logic. The raised twenty points where he described that Islam and philosophy contradict each other. Further, he charged these philosophers by calling infidel due to saying the world as an eternal place and denial of God’s knowledge.

Al-Ghazali challenged the assumptions of these philosophers which stated that Gods Will must have an external cause. He argued that there is no external cause on God’s will and may be possible that God’s will delayed effect. The decline assumptions asserted by the philosophers that time is considered as eternal and moving so this assumption is possible for the world (Hourani, 1958). In this regards, Al-Ghazali claimed his views that there is no evidence that this world is eternal and moving like time. Further, his view was that if the possibility is related to the matter, then impossibility also need to relate with something.

Some philosophers gave the examples of the son, that there is no sign of decay even after thousands of years which is an example of eternity, while the Al-Ghazali argued that son is hundred times bigger than our earth and our eyes are not able to capture such glimpse identifying the possible decays of it. Therefore, the assumptions asserted by philosophers are contradictional. Al-Ghazali concluded that the cause can happen only with power and God’s Will. Ibn-i-Sina expressed his views several events are taking place at the specific time and these events keep on changing with time, but this assumption is not for God as God is changeless. There is no role of perception associated with God’s knowledge and it is based on concepts. Some of the philosophers gave the examples such as bodies changes from child to manhood and then old age which means bodies are constantly dissolving and soul is an instrument of the body. On these arguments, Ghazali gave clarifications that soul existence is associated with the birth and end up with the body or perhaps resurrected as mentioned in Al-Quran. Some philosophers are skeptical about the physical pleasures and pains, hell and paradise.

They denied of the physical states of these feelings and called it a spiritual state hereafter. Whereas, the Ghazali argued differently to them stating the existence of these things by physical states. Ibn-i-Rushd tried reconciliation of the philosophy with Islam by saying that philosophy is related to religion as it speculates the beings and its creator. Ibn-i-Rushd responded to defend the philosophy and claimed that the religion and philosophy are compatible. He supported his claim with the help of the Aristotle dictum which states that things which do not have a beginning have no ends, therefore time is eternal. Ibn-i-Rushd did not argue against the creation of the world but express different views.

If you are a theology students and looking for Theology & Religious Studies Writing Help, we have an experienced team who can help you with the following: