History of Prohibition in the United States

Prohibition was an era lasting almost 14 years (1920-1933) in the US whereby the production, trade and distribution of alcoholic beverages were outlawed. The period was marred by gangsters, glamour, and speakeasies and increased law-breaking by even average citizens. Though prohibition was initially perceived as a noble course, its unprecedented negative consequences outweighed its benefits leading to the only time constitutional amendment was repeal in the US history. This paper focused on reviewing the history prohibition and its impacts on the American society.

Prohibition in the US referred to a countrywide constitutional ban on the importation, transportation, production and the trade of alcoholic beverages that lasted between 1920 and 1933 (Binder, 2017). The era of probation was ushered in by the approval of the 18th amendment of the US constitution which prohibited the production, transportation and trade of alcoholic beverages. However, the national temperance crusade between 1900 and 1910 made it difficult to implement the ban, in spite of passing enabling legislation referred to as Volstead Act (Spoelman & Haskell, 2016).

Prohibition was implemented in January 1920 with 33 states enacting enabling laws on the ban (Joyce, 2014). The prohibition history made it clear that the need to end liquor abuse was to some extent an informal but widespread crusade that was in place long before the prohibition law became effective at the national level ( BBC Worldwide Ltd, 2014). As at the 1830s for instance, Americans above 15 years drank about 88 whisky bottles annually. In spite of public support for the ban, the authorities faced challenges in the enforcement stage. Since liquor production and trade was a significant commercial activity, execution authority first worked under the internal revenue section. Nevertheless, as law-breaking related with prohibition increased, the implementation authority was moved to the department of justice.

Despite massive public support of prohibition, some were against it and invented creative ways of flouting the law such as creating bathtub gin in private homes. Subsequently, there was an upsurge of illegal production and trade of alcoholic beverages (bootlegging) and spread of illegal drinking dens (speakeasies) as well as a rise in gang crimes and other forms of violence which weakened the support for the ban by the late 1920s (McGirr, 2016).Gangsters began forming as organised crime units such as the mafia, which gave them a window to benefit from the lucrative illegal trade of liquor. The gangsters (bootleggers) smuggled the prohibited alcohol via underground water holes know as speakeasies. Consequently, the mafia involvement in the prohibited alcohol production and trade led to an increase in crime and powerful criminal gangs.

Impacts of the Prohibition

The 18th-century constitution amendment was perceived as the culmination of a decade’s struggle by organisations including Anti-Saloon League and Woman’s Christian Restraint union alongside the dry laws legislated by 18 states. The ban triggered unpremeditated and severe consequences in the political, social, and economic spheres of the nation (Acitelli, 2017). In the first years of the ban, the advocates of the move praised the decrease in liver-related disorders, hospitalisation for intoxication, and arrests of drunkards (Spoelman & Haskell, 2016). Such positive impacts seemed to legalise their crusades suggesting that the future of American society was likely to improve regarding reduced industrial accidents, improved moral tone, and happy families. However, the ban led to a mass disobedience from the opponents due to the negative impacts following the prohibition.  Though the ban on the production of liquor was intended at stopping people from drinking, it instead turned a majority of Americans into experts of producing it (Spoelman & Haskell, 2016). The production and sale of illegal alcohol adversely affected the public health. Unscrupulous traders began smuggling liquor to drinking joints which made it a lucrative business. As a consequence, the quality of alcohol declined and increased its supply in the black market. Several gin joints and speakeasies were on the increase. Before the ban, saloons rarely welcomed females but the prohibition period saw an increased involvement of women with nightclubs being characterised by dancing to jazz music, smoking, and drinking a cocktail of liquors (Acitelli, 2017). Employed people stopped drinking from bars and began doing so from their homes. 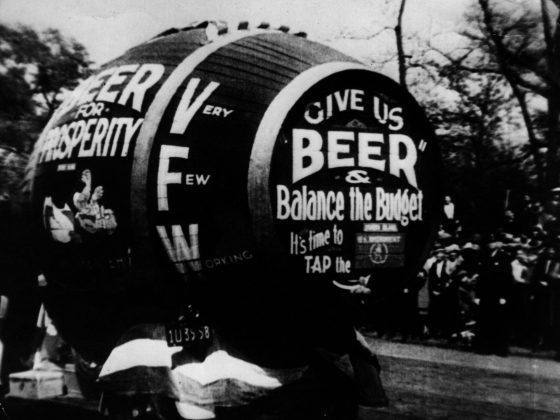 History of Prohibition in the United States

During the ban period, people became creative in brewing alcohol where they invented ways of turning grape juice into wine and served to guests in their homes. The traders in the liquor trade invented ways of redistilling alcohol from carpentry, paint and perfume supplies (Acitelli, 2017). A majority of the products used in alcohol distillation contained toxic substances, but the traders ignored such knowledge which considerably reduced the quality of alcohol. Whether made at home, redistilled from industrial liquor, or trafficked from other countries, alcoholic beverages attracted high prices in the black market (Spoelman & Haskell, 2016). The decline in alcohol quality led to an increase in mortality rate where about 1,000 people died annually from consuming contaminated liquor ( BBC Worldwide Ltd, 2014).

Moreover, there was an increase in gangsters such as George Remus and Al Capone who distributed liquor most consumers which made heroes of that prohibition period. However, such celebrity images concealed how proceeds from alcohol funded organised criminal activities. Criminal gangs benefited from the increased sale and consumption of alcohol where they murdered hundreds of their rivals and defended the profits made from the liquor along with infiltrating legitimate governments, labour unions, and businesses (Binder, 2017).

The prohibition also had adverse effects on the law enforcement agencies. During the dry era, huge sums of money got exchanged in a fraudulent manner which created massive corruption scandals both at the local and federal level. Both prohibition agents and police officers were also compromised using bribes, and the lucrative proceeds from the illegal trade and some got involved in the outlawed trade (Spoelman & Haskell, 2016). Though some of the officers remained honest in their duties, a majority of them succumbed to the trap of corruption where they weakened the public trust in enforcing the ban during the period of probation.

The increase of the illegal liquor business during the ban era also led to an upsurge of criminal gangs in the US. During the ban period, the courts got overwhelmed by legal cases, and jails filled up which crippled the judicial system of the country. Several cases got delayed for over a year making a poor administration of justice. With the increased case backlogs, the justice system transformed into a plea bargain to enable the clearance of several cases at ago, becoming a usual practice in the country’s jurisprudence during that time (Spoelman & Haskell, 2016).

Further, the alcohol prohibition had an adverse economic impact on other industrial sectors in the US ( BBC Worldwide Ltd, 2014). The expectations of implementing the prohibition were that sales of goods such as household and clothing products would skyrocket. Also, landlords and property developers anticipated that rental charges would increase along with improved neighbourhood following the closure of bars. The producers of products such as soft drinks and grape juices also expected an increased market share. The traders in the entertainment industry also anticipated a boom in their businesses as they thought people substitute drinking with having fun. However, none of these expectations got fulfilled. On the contrary, there was a series of unintended adverse consequences. For instance, businesses across the economy including restaurants and entertainment registered losses as they could no longer attract customers without the sale of legal liquor (Acitelli, 2017). Moreover, the closure of bars, distilleries, and breweries led to massive retrenchments which resulted to loss of employment and consequently, more jobs got lost including waiters, truckers, barrel makers as well other related businesses (McGirr, 2016).

Finally, the alcohol prohibition severely crippled the government operations due to a loss in tax revenues. Before the ban, a majority of states depended on excise duty levied on alcohol sales for their budgetary funding.  For example, New York State generated about 75% of its revenues from alcohol taxes before the ban. After prohibition, all that revenue got lost (Riggs, 2015).  The national government also suffered a big blow from prohibition as it lost about $11 billion in tax income while it spent about $300 million to execute the ban on liquor (Riggs, 2015).

The widespread failure of the ban led to its repeal in February 1933. The massive loss of jobs created by the liquor ban coupled with the great depression of 1930 left the country with little incentive to continue with prohibition as there was increased the desire to create jobs to counter adverse effects of the economic downturn (McGirr, 2016). The ascendance to power by Democrat Frank Roosevelt paved the way for the 21st constitutional amendment that repealed the 18th amendment bringing prohibition ton to an end (Joyce, 2014). Although a few states declined to lift the ban, all of them had lifted the ban by 1966.

It was evident that prohibition did not achieve the purpose for which it was intended and instead resulted in far more adverse consequences than its few advantages ( BBC Worldwide Ltd, 2014). A majority of the Americans welcomed the lifting of prohibition with relief. The coming to an end of the ban also reduced lawlessness and conflicts, and it gave an opportunity for the government to tax alcohol thus generating the much-needed revenues to fund relief programs during that period the great depression.