The US Healthcare System Compared To Other Nations

What are the main differences between the US healthcare system and other nations? The US healthcare system is considered by many, to be one of the very few health systems which excel in quality of care provided. The comparative analysis of the financial spending on the other hand serves an eye opener for the cost involved and the real quality provided on ground.

To begin with, the healthcare system of the United States has some disproportionate spending as compared to the other high-income countries. A study was conducted to measure the spending of 11 high income countries in the health sector. It was found that US spent particularly more on doctors, pharmaceuticals and on administrative cost. The annual cost was US$ 218173 and 1443 for the first two while 8% spending was allocated to the governance and administration which was far greater than other countries in the similar cohort. Even with such massive spending, the health adjusted life expectancy of the US remains approximately 3 years less than other high-income countries. Furthermore, US spends 17.8% of its GDP which is comparatively higher to other countries, who, on average, spends 11.5%. The health insurance which is considered a decent safety net for the general population is 90 % in the US as opposed to 99% in the countries of similar income category. 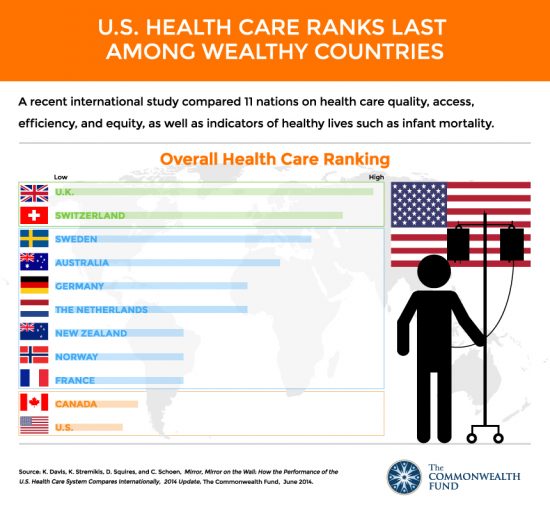 The US healthcare System vs Other Nations

When considering a comparative analysis, between the NHI and NHS healthcare systems, the difference is evident. For instance, in the NHI, the universal health coverage to the elderly (above 65 years) is provided by paying a premium contribution which is too much for many, whereas in the NHS, there are no such deductibles. Furthermore, the spending on the support systems, which in turn aims to improve the health, such as housing, social services, community outreach and nutrition by the NHS is far more than the NHI.

Even with so much spending the performance of US healthcare system is still questionable. Although it seems the care to be in reach, but many people avoid discussing key issues such as mental health, with their primary care provider. Some of them even have high need (presence of three or more chronic diseases or need of assistance in their daily activities) but they avoid seeking medical help due to high cost of care. Even though Medicare provides decent healthcare in general, but the high premium cost still causes a large population to pay out of pocket for continuity of care.

The cost of care in the US is comparatively higher than other high-income countries mostly because wide chunk is paid to doctors, pharmaceuticals and administration. The access to healthcare is quite widespread but still US healthcare must improve their indicators to make healthcare freely accessible to all.