In this report I gauge the macroeconomic trend in Russia to see how macroeconomic variables are behaving in last ten years in Russia and by looking at the available data I tried to find the major economic problems that Russia faced in these ten years along with some suggestions about policies that should be implemented to overcome these economic issues. 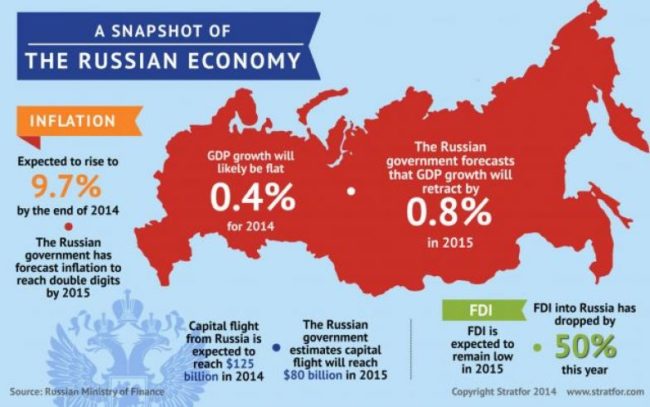 I have collected the data for my country Russia on three major macroeconomics variables including unemployment rate, Inflation rate and economic growth measured in terms of GDP. The data has been collected for last 10 years from 2009 to 2018.

In the above table economic growth is measured by growth rate in GDP or the GDP per capita can also be seen as a measurement of economic growth. The table above shows that economy tends to fluctuate during these ten years, there is not a single trend of increasing or decreasing in any of these three variables.

Another more easy way to look at the trends of inflation, unemployment and economic growth is the graphical presentation of this data. Below, separate graphs of all these three variables have been shown. 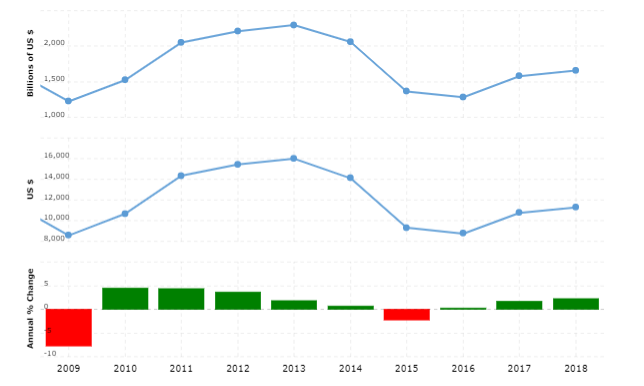 The graph above represents the growth rate of GDP from 2009 to 2018 for Russia. This graph shows that there was an increasing trend from 2009 to 2014 in GDP but then there is sharp decrease in GDP growth in 2014 to 2015 and far slight decrease between 2015 and 2016 but again it increases slightly in 2017 and 2018. In 2013 GDP growth is at its top. Two year period from 2014 and 2016 can be considered as a recession for Russian economy because of decreasing GDP and economic growth at increasing rate. 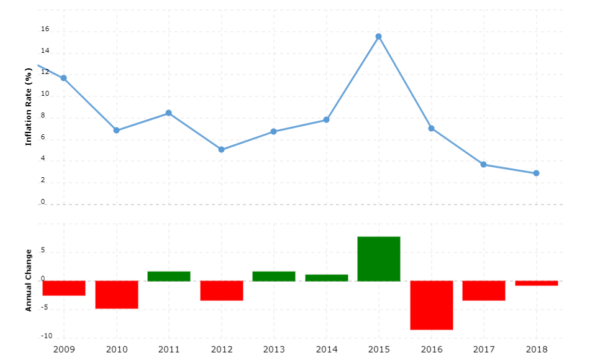 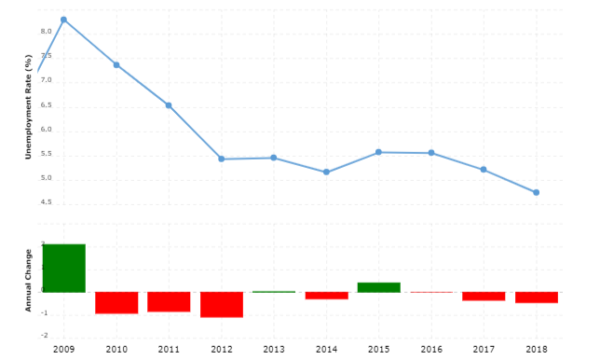 All these above graphs and table indicates that 2014 and 2015 were bad economical years for Russia. The reason for this was named Russian Financial crisis 2014-1015. This financial crisis in Russia was stemmed from sharp devaluation of the Russian ruble in the beginning of second half of 2014. There were several reasons for this devaluation of Russian ruble. Including almost 50% fall in crude oil prices and decline in major exports of Russia in mid-2014 and also due to the international economic sanctions imposed on Russia following  Crimean Peninsula’s annexation by Russian federation in the start of 2014 and the Russian military intervention in Ukraine (“The financial crisis,” n.d).

Thus the decreased oil prices, devaluation of Russian ruble, inflation rate more than 4%, imbalance terms of trade and exchange rate shock due to banned imports were the main problems that Russian economy faced in this period.

When inflation remains same at a high level for a long period of time then people also make high inflation expectations for the future which is another hurdle for the Bank of Russia to bring the rate of inflation down to 4%.

To overcome this crises Russian economy has to implement some effective policies to let the economy grow with low prices and low levels of unemployment.

The stable prices allows maintaining a purchasing power of the domestic currency which is one of the requirements of a stable growth of Russia. When economy succeeded in ensuring a sustainable and low inflation it will result in creating a more predictable environment for the economic activities of households and producers. It facilitates the individuals and manufacturers in making rational and positive expectations in decision-making regarding consumption and investment matters. Thus, price stability helps lowering economic uncertainty and generates financial resources for the investment in long run, which provides the economy a ground for well-balanced and stable growth.

A contractionary monetary policy that restricts the spending and incentivize savings can act as a breakdown on inflation. Lowering the money supply or increasing the interest rates tends to appreciate the local currency. But it has its shortcomings with it as monetary policy effects are usually short term and does not impact the real economy.

Unfortunately, there is no silver bullet or a standard strategy that can be implemented alone to correct all thing at the same time with no loss, as both policy tools, the fiscal policy and the monetary policy carry with them their own costs and benefits. However, an effective use of these policies will result in some positive benefit to society, especially in stimulating demand after some crisis. Thus a mixed policy is effective to come out of this crises.

According to The Central Bank of Russian Federation, The Russian economy follows a mixed policy strategy. They implement monetary policy using interest rate to maintain price levels and to much extent they follows a classical point of view of laissez faire economy by preventing the government intervention in most of the macroeconomic variables excluding prices. They followed a strategy of floating exchange rate where government do not set any exchange rate by itself. And the data on macro trends of Russia shows that this strategy of Russian government worked. As the economic growth rate of Russia has increased from almost 1,200 to 1,700 billion US$ from year 2016 t0 2018. Likewise, unemployment rate has fall from 5.56% to 4.74% and inflation rate reached from 7.04% to 2.88% in two year period of 2016 and 2018.

So concluding, in my point of view to sustain this rate of growth Russian government has to make sure the stable prices. Furthermore, The Russian Bank has to incentivize savings by increasing interest rates on savings and restricts the spending to reduce overall spending in order to reduce inflation. Also an expansionary fiscal policy can help the economy to boost by increasing the tax rates to lower the spending and thus reducing inflation. However, if the economy is near full capacity, expansionary fiscal policy risks sparking inflation. This inflation reduce the margins of certain corporations in competitive industries that may not be able to easily pass on costs to customers. So Russian government should be very precise in selecting specific industries for imposing taxes on them.