The Case Against the Electoral College 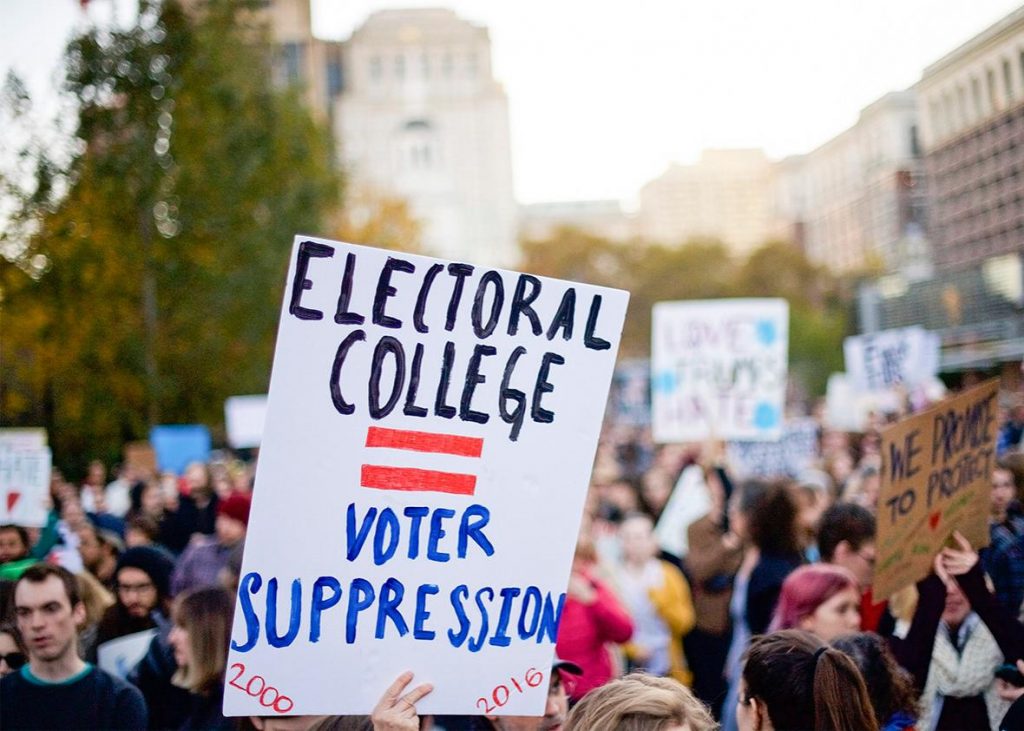 While the U.S. prides itself on being one of the world’s oldest and fairest democracies, the reality is that the American political system is full of anachronisms that have been excised in other democracies. For example, the antiquated American system of first-past-the-post voting, which prevents third parties from gaining any headway against the Republicans or Democrats, has been rectified with proportional voting systems in countries like Sweden and the Netherlands. Similarly, our system of the electoral college, where the president is determined not by the votes of American citizens, but by appointed electors, has no analogue in any other democracy in the developed world. This is to our detriment, because the electoral college is an outmoded institution that needs to be abolished. Beyond the fact that it deprives the American people of their voting rights, the electoral college has been used to deny the people’s choice for president on several occasions, most recently in the past election, when Donald Trump won the electoral college despite receiving fewer votes than Hillary Clinton. The electoral college helps enforce white supremacy by suppressing the votes of minority and women voters and thus needs to be consigned to the dustbin of history, along with slavery, Jim Crow, and other regressive concepts that this country has abandoned.

The electoral college, like much of the Constitution, was designed as a compromise between the states. During the initial creation of the Constitution following the American Revolution, the structure of the federal government had to be laid out in such a fashion that all thirteen states found it acceptable. Because of the widely disparate sizes in population that the colonies had, small states feared having their political voices drowned out in a system that purely emphasized the popular vote. This fear lead to the compromise that created the two houses of Congress: the House of Representatives, which was apportioned by population, and the Senate, in which each state got two senators regardless of population. It also informed the creation of the electoral college, in which the vote for president would not be determined by popular vote, but by electoral votes apportioned to states by population, with no state having fewer than three votes (representing its two senators and one representative). While the path to winning the presidency still entailed winning a majority of electoral votes, when states began allocating their electors according to the popular vote winner in their state, it became possible to win the presidency despite receiving a minority of popular votes.

This can be done by winning states with a majority of electoral votes by very narrow margins and losing other, larger states by landslide margins. Because small states are over-represented in the electoral college (since every state gets a minimum of three electoral votes despite its population), it is possible to string together an electoral college victory on the basis of these states alone. A similar problem exists in the House of Representatives: due to the concentration of Democratic voters in urban areas, the Republicans have an advantage when it comes to winning House seats due to the fact that Republicans are spread out across a greater number of seats.

That is precisely what has happened twice in the past two years, both times benefiting the Republican Party. In the election of 2000, Texas Governor George W. Bush narrowly defeated Vice President Al Gore in the electoral college with 271 votes to Gore’s 267, despite the fact that Gore won the popular vote by over 500,000 votes. This was due to Bush’s narrow victory in the swing state of Florida, where the vote count was marred by reports of irregularities and possible electoral fraud on the Republicans’ part: Jeb Bush, George W. Bush’s younger brother, was governor of the state at the time (Hill & McKee, 712). In 2016, Donald Trump defeated Hillary Clinton in the electoral college by a wide margin, taking 304 votes to her 227 votes, despite the fact that she won the popular vote by nearly three million votes. This was due to the fact that Trump eked out narrow victories in Pennsylvania, Wisconsin, Michigan and other swing states while Clinton racked up landslide margins in large blue states such as California and New York.

The obvious unjustness of the electoral college barely needs to be stated. A plurality of American voters wanted Hillary Clinton to be their president. Why then should Trump become president based on the fact that he got an arbitrary number of electors? There is no democracy on the planet that allows candidates who receive a minority of the vote to win elections under any circumstances, and yet we allow popular vote losers to assume the most powerful office in our country without even questioning the justness of the system (Edwards, 124). Moreover, the electoral college works to entrench white supremacy and structural racism in American society. The electoral college allowed Trump to be elected based on the support of primarily white, uneducated voters in Pennsylvania, Wisconsin and other backwards, economically deprived states. Minority voters, who overwhelmingly supported Clinton, are concentrated in progressive, economically vibrant states like California and New York, and thus have the power of their votes diluted due to the fact that the electoral college penalizes heavily populated states. California, New York and the other states Clinton won also happen to be the economic engine of America, where virtually all of its high-earning industries, media, entertainment and education is located. The states that gave Trump his victory are by and large economically depressed and contribute little to the American mosaic; indeed, despite Republican opposition to big government, many of the states Trump won are net consumers of federal tax dollars. Why then should these states be given a bigger voice when it comes to electing the most powerful politician in the country?

This scenario is almost what happened in 1968. That year, Democratic Alabama Governor George Wallace ran a third-party campaign based around fighting the civil rights movement, rolling back advances that African-Americans had made, and entrenching racism as a central fact of Southern and American society. Wallace had no hope of winning the election due to his lack of appeal outside the South; he ran because he hoped to win enough electoral votes to deny both Democratic nominee Hubert Humphrey and Republican nominee Richard Nixon the majority they needed to win (Banzhaff, 304). He would then be able to extract concessions from one or the other, despite the fact that most American voters outside the South were opposed to his policies. This fortunately didn’t happen, because Nixon succeeded in winning a majority of electoral votes (and a plurality of popular votes), allowing him to win the presidency without Wallace’s support.

In recent years, third-party candidates have swung presidential elections through manipulating the electoral college. In 1992 and 1996, independent candidate Ross Perot was blamed by Republicans for swinging both elections to Bill Clinton, because Perot drew enough support in previously safe red states to allow Clinton to win them. In 2000, Green Party candidate Ralph Nader was blamed for Bush’s victory, because Nader was perceived as drawing votes from Al Gore in critical states such as Florida (Wand, 802). In the 2016 election, independent candidate Evan McMullin was accused of trying to deny Trump a victory in the electoral college, because McMullin heavily campaigned in strong Republican states like Utah despite the fact that he was incapable of winning the election; he was only on the ballot in a handful of states. These perverse incentives that third-party candidates have to act as spoilers in close races are made possible by the electoral college.

It’s clear that the electoral college needs to be abolished and replaced with a pure popular, nationwide vote (Wagner, 575). While it may have been a well-intentioned idea when the Constitution was created, the fact that it continues to allow candidates like George W. Bush and Donald Trump to become president despite being rejected by a plurality of the American people is a flaw that cannot be ignored. The electoral college is a major obstacle to the objective of creating a racially and socially just society, as it overvalues the votes of uneducated whites and undervalues those of people of color. Finally, it makes it possible for racist populists like George Wallace to play kingmaker and manipulate election outcomes with only a small amount of votes. These are all reasons why the electoral college needs to be gotten rid of: it is wrecking democracy itself.