The collapse of the Soviet Union in 1991 hurt the Cuban economy. The country went into an economic crisis because it depended heavily on the Soviet Union market. According to various Cohen, after the collapse of the Soviet Union more Cuba lost more than 80% of its exports and imports which had an enormous effect on the country’s gross domestic products (90). Cuba was Isolated after the fall of the Soviet Union. Fidel Castro was quoted saying that they had no security and that he did not know whether the goods they received traditionally were going to come anymore (Borge 29). As a result, Cuba was forced to enter diplomatic relationships with other western nation. Also, the country decided to change its oil policy to cater for the Soviet oil imports lost in the process (Carmelo 333). Policy experts in Cuba agreed to buy whatever oil it could afford to buy in the global market (Baracca 203). Historical records have indicated that Cuba made tourism and financial deals with western nations to get foreign currency that would reignite the economy (Carmelo 335). As part of the revision of the international relation policy, Cuba withdrew its military personnel from overseas countries to which they had been arrayed (Hernández-Catá 4). Faber (152) revealed that since the collapse of the Soviet Union led to Cuba’s hardship during the special period. Faber stated that Cuba had to transition to a decentralized economy by embracing elements of capitalism. Cuba started to reform their foreign policies by encouraging outside investment ( Faber 153).

According to Baracca (210), Cuba was forced to look elsewhere for economic restoration after the collapse of the Soviet Union. Baracca stated that Cuba had to make substantial changes to revamp their economy (213). Therefore, according to Baracca had to involve compromises their communism ideologies (213). The move to look for other places for foreign investment was called zero option approach. The zero option approach was enacted in 1991 by establishing a tariff-free to encourage trade with other foreign entities (Carmelo 335). In this case, Cuba had to embrace capitalist policies and mechanisms not only external economies but also internal economies (Erisman and John 44). In 1991 during the Party Congress Fidel Castro stated that Cuba needed liberalization from socialism and revolution to foreign capital (Borge 25). Also, in 1991 Fidel Castro attended the annual Iber-American summit where he signed the Treaty of Tlatelolco that Cuba had failed to sign in 1967 (Hernández-Catá 7). Cuba had failed to sign the Tlatelolco treaty claiming that it would not enter into the diplomatic relationship with the Latin nations until the United States guaranteed that it would not place military equipment at Guantanamo (Morales and Gary 99).  In 1992 Cuba enacted a constitutional amendment to allow partnership between Cuba and other foreign states (Carmelo 332). As a result, the bill permitted foreign investors to have up to 49% ownership of trade and was exempted from taxes (Suchlicki and Antonio 37). In May 1992 Cuba decided to end the Cold war in the Caribbean region which was depicted by the reestablishment of normal diplomatic union with Grenada (Erisman and John 47). As a result, Cuba was integrated into the Caribbean Tourist Organization (CTO) which was a major step accelerating Cuba’s diplomatic relationships in the Caribbean region (Erisman and John 51). According to Farber (156), Fidel Castro started to revise the relationships with the Caribbean nations as a result of the collapse of the Soviet Union (Borge 21). The revision was depicted by his visits throughout the regions. Furthermore, in 1992 Cuba announced that it had stopped to offer military and financial support to revolutionary movements that were seeking to overthrow their governments (Carmelo 355). 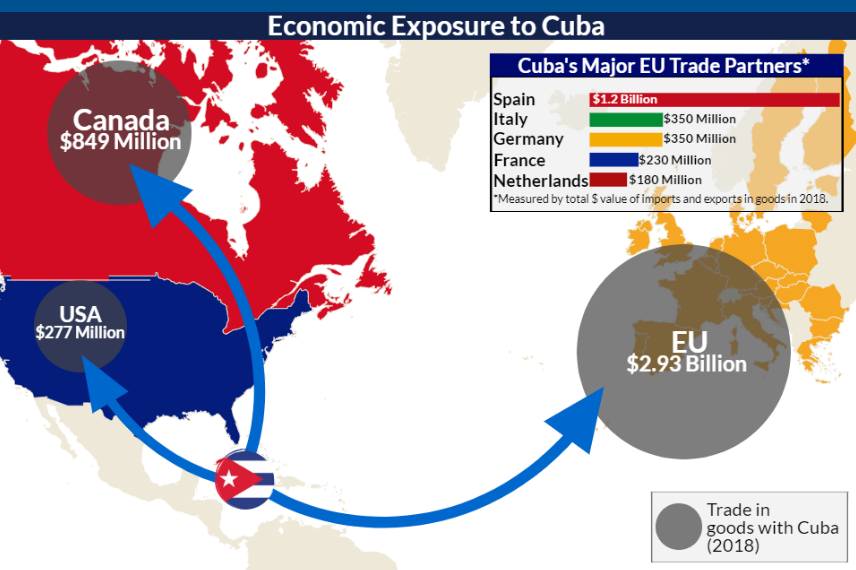 However, Fidel Castro’s liberalization policy of a free market did not achieve its goals. The policy did not have clear rules and involved bureaucracies that discouraged foreign investors from investing (Suchlicki and Antonio 31). In addition to that, despite assurances from Fidel Castro investors in the free market were afraid of a change in regime. In fact, according to various surveys, many operators feared nationalization of their assets in case Fidel lost the helm of the government (Borge). Therefore, in 1993 Cuba realized that its foreign policy was insufficient and it needed to be reformed. Cuban policymakers and experts responded by revising the country’s economic relations (Hernández-Catá 19). In this case, the policy experts sought for new trade relation, new products to trade and new foreign investments. Although the new pillars of economic were successful, Cuban economy was still struggling. During this period the black market became the source for many goods and holding US dollars was a necessary mechanism for survival (Hernández-Catá. As a result, Fidel reversed the policy of pursuing US dollars through foreign investment and seeking to eradicate the economic crisis using the Cuban Peso (Borge 30). In other words, Castro legalized US dollars and liberalized the Cuba Peso. Castro stated that move would counter the rising threat posed by the black market and it would help the country gain access to the foreign currency (Borge)

The movement to legalize the U.S dollar had an enormous effect on the Cuban economy. For example, Hernández-Catá stated that the new policy created a new source of foreign exchange as many relatives living in the United States would send their families remittances (31). In 1994 Cuba signed an agreement with the United States whereby the United States agreed to welcome 20,000 Cubans annually (Morales and Gary 104). However, in 1996 the United States imposed a financial embargo on Cuba the restricted entities allied to America from trading with the country (Morales and Gary 111). The embargo also prevented Cuban Americans from sending remittances to their relatives in Cuba. The foreign relations reforms continued in the mid-1990s; the island started to show elements of religion, and it led to the maiden visit of Pope John Paul II (Zebich and Heather 67). The visit was a sign of a change of Marxists philosophies to western ideologies that included religion. Moreover, the trip was an indication that Cuba was ready to develop relationships with the rest of the world (Zebich and Heather 73). Many historians have argued that that visit of Catholic Pope is the one that made the United States remove restrictions on Cuban Americans sending remittances to their families (Zebich and Heather 74).

According to Perez, Cuba has become a significant element in the global community (453). The collapse of the Soviet Union led to a paradigm shift in the foreign relations approach. Primarily, according to Perez, Cuba’s policymakers created diplomatic relations that are more focused on deepening the bonds between the major trade partners 454.  Today, Havana has the most extensive diplomatic base compare to other Latin American nations with more than 140 embassies and over 100 foreign missions globally (Perez 456). In addition to that, Cuba has consolidated ties with states from the Latin American and Caribbean region plus it has fuelled diplomatic relationships with Western and Asian countries (Perez 460).

In conclusion, the collapse of the Soviet Union hurt Cuba’s foreign relations. As a result, Cuba had to develop other international association to revamp the country’s economy. In this case, Fidel Castro who was the leader of the state initiated various policies that were divergent from socialist ideologies. The policies include encouraging foreign investment, withdrawing troop from oversees, legalization of the US dollar and mending relationship with Latin and Caribbean nations. Fidel Castro established a tariff-free market and created tax incentives for foreign investors to encourage them to trade in Cuba. In short, Cuba’s diplomatic relations after the collapse of the Soviet Union were geared towards opening Cuba to the rest of the world.

In addition to that, I realized that primary sources are the best reference point in validating various historical event or facts. For instance, multiple speeches by Fidel Castro who was the head of Cuba were important in analyzing the correlation between the collapse of the Soviet Union and the change of Cuban foreign relations. Furthermore, during the research, I realized that every historian has a role in identifying historical research problems and conducting extensive research to gather as much data as possible concerning the questions.

Contact Now
Peachy Essay, registered as PEACHY ESSAY LLC (company number 000950125) 30 N Gould St Ste N, Sheridan, Wyoming, 82801, US: a professional writing service that provides original papers. Our products include academic papers of varying complexity and other personalized services, along with research materials for assistance purposes only. All the materials from our website should be used with proper references. The terms are represented by the law of the US.