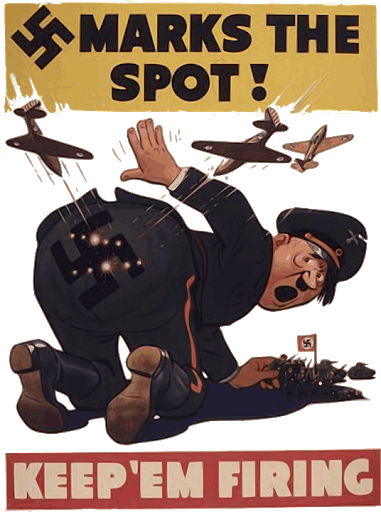 During all America’s wars in the past century, resort to propaganda was an essential aspect of trying to unite the nation endorsing specific war aims. The three main objectives included a succinct definition of the enemy, the purpose for the fight and why the enemy had to be conquered. Manipulating the emotions and thoughts of the citizens was a great tool to generate an elevated level of commitment and morale. During the World War 2, the Office of War Information (OWI) was responsible for disseminating War propaganda aimed at directing sophisticated appeals to targeted groups of the population including soldiers and citizens. Different channels of War propaganda employed during the war included films, documentaries, press releases and official statements. Among the most prominent filmmakers who employed propaganda during the World War 2 in America include Walt Disney and Hollywood. In as much as most American Motion pictures had common essential elements to achieve their effects as means of propaganda, Walt Disney’s animated series still processed unique techniques that strived to shape the reception of War for the American audience.

World war 2 presented among the best and worst moments for the motion film industry in the US. It was a phase promoting change and objection, accomplishment and distress and at the same time an intense focus on the task at hand which was primarily disseminating pro American war propaganda. Uncertainty to both Hollywood and Walt Disney’s long-term prospect within the American film industry as soon as the task was completed posed a significant challenge. The American president, Roosevelt, tasked both Hollywood and Walt Disney to emotionalize the war and promote public awareness to what the organizations did best- production and distribution of motion films. The United States government identified the relevance of disseminating pro-American war propaganda to support the war.  As the director of the OWI, Elmer Davis, revealed: “The easiest way to inject a propaganda idea into most people’s minds is to let it go in through the medium of an entertainment picture when they do not realize that they are being propagandized.”[2] Similarly, Hollywood played a critical aspect in persuasion. One of its directors, Darryl Zanuck, remarked plainly, ” if you have something worthwhile to say, dress it in the glittering robes of entertainment and you will find a ready market. . . . Without entertainment, no propaganda film is worth a dime[3]” as he addressed the Writers Congress in 1943.

Production of movies during the World war 2 wasn’t business as usual as it necessitated an enormous transformation of nearly each stage of industry functions. Hollywood handled the transformation splendidly. Hollywood supported the war successfully by a number of criteria including great profits and revenues for all concerned stakeholders, disseminating propaganda and information to both military and civilian audiences. The World war 2 period marked among the best periods financially for the film enterprise, especially Hollywood. The Big eight combined earnings improved from $20 million to $35 million from 1940 to 1941. The prewar period hence initiated the economic upturn.

During the war, these figures were further surpassed bringing the total Big eights profits to nearly $50 million in 1942. These figures further increased in the preceding three years sustaining a peak of $ 60 million consecutively. The war period marked the worthiest period for the film enterprise not because of the remarkable economic success realized but also because of cinematic and social accomplishments. Both nonfiction films and features represented significant on-screen advances during the war. Most top documentary filmmakers experienced an interest in fiction filmmaking. During 1944 and 1945, documentary and fictional management of the war had achieved an extraordinary mutuality only unique to wartime screen dynamic.

Both the OWI director, Elmer Davis and the American president, Roosevelt were eager to convey to the American populace six critical aspects of the war including issues resulting to the war, the enemy’s characteristics and goals, realities experienced by men at the warfront, civilian roles at home, the essence of domestic production and the plan of the United Nations association. The aims of the war were eager to be interpreted via motion picture which was an essential “weapon of democracy”. Film was employed to boost the morale of American citizens, soldiers and neutral and allied nations globally. This analogy was also supported by Bosley Crowther a critic in the New York times who took a similar position in January 1942 arguing that the films ought to be used as a “program of national persuasion”. The entertainment enterprise hence played a critical task in the stimulation of the optimism and patriotism disseminating the authoritative report of the conflict subsequent to 1941. Apart from the stimulation of morale and patriotism, most studio managers came to the conclusion that collaboration with government propaganda attempts was vital to obviate absolute censoring or still a takeover of the enterprise.

During the World war 2, the president of the United States Roosevelt had the authority to constrain news distributed to the media. This legislation which forbade maps or sketches of military bases and unauthorized photographs provided the president with the powers to define which military information ought to be classified for security protection. This legislation was cited by the president as he imposed presidential control over classification systems in the May 1940 Executive Order 8381. Roosevelt was, however, reluctant to exercise the authority citing the employment of espionage legislation in the course of the first world war which eventuated in the imprisonment of presidents Wilson’s critics. Roosevelt was also sensitive to probable anxiety between the employment of the Office of War Information agency and censorship. He believed that Americans had a right to have access to news during the War. On June 13th, 1942, Roosevelt implemented executive order 9182 which resulted in the formation of a federal agency, the Office of the War Information (OWI)[6]. The agency was formulated to conduct wartime and propaganda information. The agency was also a result of an integration of different agencies including the Office of Facts and Figures which primarily involved in intelligence and information undertakings. Elmer Davis, a former New York Times director and a popular CBS News reporter was appointed its director by the president.

Under Elmer’s leadership, the agency was tasked to facilitate “information programs designed to facilitate the development of an informed and intelligent understanding, at home and abroad, of the status and progress of the war effort and of the war policies, activities, and aims of the Government[7]” via motion picture, radio, posters, photographs and the press. Despite observing the appreciation the country got from its war operations, America was aware of the misunderstandings perceived regarding the country during the pre-war and propaganda disseminated by both the Japanese and Germans. Consequently, the OWI overseas branch was tasked to develop propaganda for its allies such as Australia and England. The branch was also responsible for developing propaganda programs to nations such as Netherlands and France who were liberated by America. This branch aimed at persuading these nations to the weight of American power and attractiveness of American principles by narrating “how America lives”. This also served in the preparation for a great American influence in the future peace. This agency lasted until August 1945 where it was eventually transformed to the United States Information Agency (USIA).

Walt Disney productions was heavily associated with the development of propaganda films for the US government during the 2nd World War. Walt Disney’s production widespread familiarity heavily benefited the government with the production of Pro-American war propaganda in a bid to back the war effort. Walt Disney produced films for every United States military and government branch. The government heavily relied on Walt Disney as compared to any other studio chief to build public morale in providing training and instructions to soldiers and sailors. This was accomplished via animated graphics through expedition of brilliant mobilization of civilians and servicemen during the war period. It is estimated that “approximately 90% of Walt Disney’s employees were devoted to the production of governments propaganda film”[8].

It is also significant to note that the 2nd World War reorganised the possibilities of animation. Before the war, animation was viewed as a genre of childish performance. However, a turning point in its utility was the raid on Pearl Harbor. The US Army began working with Walt Disney on 8th December 1941 where military personnel was stationed at the studio during the duration of the war. Disney and the army began production of films targeted at different audiences. Films intended for troops included education and training on particular topics whereas films designated for the general public contained mostly propaganda. For the first time, animated cartoons enabled the government to disseminate information more entertainingly. War bonds- a form of debt security to finance military operations received the most press and advertising. A classic example is the Bugs Bunny Bond rally which depicts Bugs Bunny dancing and singing about war bonds. It is since then that Bugs Bunny achieved his popularity. Other films which promoted the purchase of War bonds comprise All together, Wise Dwarfs, Donald’s decision and Foney Fables. Such films were targeted at United States citizens to promote investments in War bonds. Animation was also employed for training purposes. Animations were written to train ground crewmen and pilots about thunderstorms and the war front. Other films aimed at training pilots includes theory of the C-1 AUTOPILOT: Part One Basic Principles which served as an introduction to the autopilot function, a new concept during the period.

Animation was also employed appropriately for political campaigning. An animation, Hell Bent for Election was produced by Warner Brothers supporting the president’s Roosevelt presidential bid. The film was so socialist and pertinent in nature that it wasn’t displayed in theatres. However, it was displayed to members in rallies and meetings. Some animation motion films employed heavy propagandistic symbolism than others. For instance, Der Fuehrer’s Face originally named Donald Duck in Nuzi Land was among the most popular propagandist cartoons developed by Walt Disney. The film begins with a comical band of Nazi performing “super-duper supermen”. Disney depicts Donald’s eating breakfast by dipping a single bean of coffee to a cup of water and eating bacon and eggs by spraying his mouth with their scent. Hitler had promised plenty of food and great wealth to his countrymen. The army and Disney knew this and wanted to portray the Germans as living in conditions that Hitler never delivered. The main character in the film Donald was continuously overworked with minimal compensation. Through this, producers tried to demonstrate that factory conditions were not as glorious as Hitler tried to depict. However, in the end, Donald wakes up from his dream and becomes relieved he will always be an American citizen. Such a film was targeted at the general United States audience to stimulate patriotism.

In conclusion, we can establish that the American government utilized motion pictures effectively in the past century to propaganda as it attempted to unify the country. A manipulation of the citizen’s emotions and thoughts was necessary to generate a high level of commitment and morale. This was primarily achieved through the American film industry especially Holly Wood and Walt Disney. Both were critical in realizing not only economic benefits but also cinematic and social achievements. Organizations such as Office of War Information was critical in achieving government propaganda directed at particular groups within the population. Walt Disney was also a critical channel for propaganda dissemination especially through animations as it produced films for almost each single branch of the government and military.